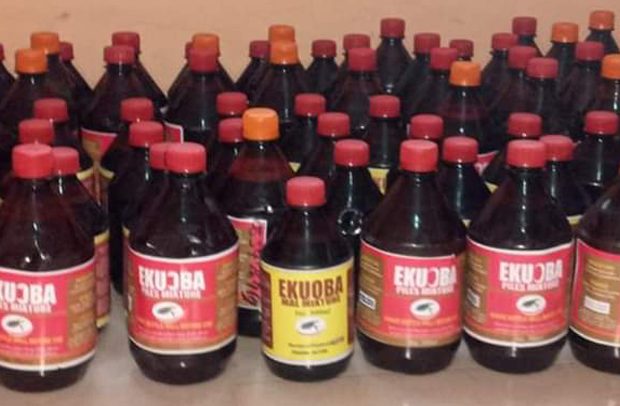 The expired drugs on display

A 20-year-old man is in the grip of the Odumase-Krobo police for allegedly selling an expired herbal drug in the area.

The suspect, Bismark Aboagye, and three other accomplices (now at large) are believed to have sold the herbal product to about 226 customers.

Aboagye was arrested at Agormenya Market in the Lower Manya Krobo Municipality of the Eastern Region last Saturday.

The Regional Spokesman for the Ghana Police Service, DSP Ebenezer Tetteh, who confirmed the incident to DAILY GUIDE, said the suspect was being interrogated for selling the expired drug.

“The man who bought the drug detected that it had expired and he came to the police station with four plastic bottles of liquid medicine labelled as ‘Ekuoba Mal Mixture’  to report that he was at his house when four young men came to sell them to him at a cost of GH¢60,” DSP Tetteh narrated.

According to him, the police immediately accompanied the complainant to the area and arrested Aboagye and also retrieved 157 plastic bottles containing liquid medicine suspected to have expired.

He said three of Aboagye’s accomplices upon seeing the police bolted, and they had been declared wanted.

During a search in his room, additional 80 bottles of the drug and other herbal products were retrieved.

He said the suspects claimed the mixture could heal stomach disorders, gonorrhea and candidiasis, but the medicine does not appear to have approval from regulators.

DAILY GUIDE gathered that the suspects started selling the expired medicine from May 11, 2020.

A Leader Recognizes The People God Sends To Help Him - 2