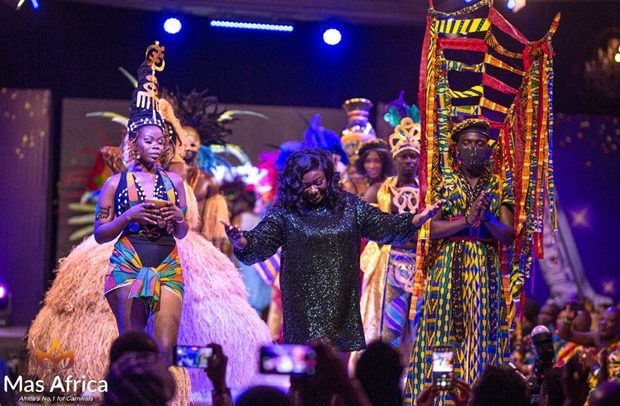 MAS AFRICA in collaboration with Labadi Beach Hotel recently launched the Adinkra Carnival – Accra at the plush Labadi Beach Hotel.
It was a beautiful display of colour, creativity, artistic arts and culture.
The night also featured a guest performance from Safo NP, a UK-based artist, who had made a song for the Return.
Mas Africa has been involved in organising carnivals over the past 15 years and manages the African content in the UK Nottinghill Carnival; which attracts over two million people annually and is the second biggest carnival in the world.
It has over the years worked on bringing carnivals to Ghana and in 2019, held a mini carnival parade in Kumasi for the Year of Return.
This year, it is preparing to present in December, the biggest display of carnival culture, creative arts and performances.
In the week leading up to the launch, Mas Africa worked with students from Sima Brew Fashion School to create some costumes for the launch. It aims to hold more and more workshops with fashion schools and the creative arts industry in Ghana to pass on the skills of carnival costume making, puppets and structures. These workshops were facilitated by two designers from the UK, namely Barbara Nyarko and Maria Joseph. Barbara Nyarko also doubles as a partner and director of Mas Africa. 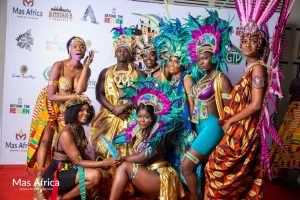 The launch was an invitation-only event. It nonetheless was a huge success with over 300 guests in attendance including some chiefs and queen mothers from Greater Accra, Central and the Eastern Regions. Also in attendance were members of the diplomatic community, heads of institutions and celebrities.
The catwalk showcased a children’s and adult range of costumes. The adult range had both the usual feathered costumes and some fabric costumes designed by Barbara Nyarko, Maria Joseph and Melissa Simon-Hartman of Trinidadian and Ghanaian heritage.
GTP sponsored Mas Africa with some fabrics to facilitate the creation of some of the costumes with performances from the Winneba Noble’s No. 1 Masqueraders and Takoradi’s Evergreen Brass Band.
The special guest for the event was Ansel Keith Wong, former chair of the Notting Hill Carnival Board and founder of Elimu Mas Band. He spoke about the origins of Carnival, the components that make up carnival, from the Masquerade, Music, Arts and innovations.
He also explored some of the benefits of carnival which included building the creative industry, promoting community cohesion and inclusion, job creation and boosting tourism, among others.
He looked at the synergy between Africa and the Caribbeans, given our shared roots and the prospects of creating viable business between our two cultures.
When asked about what to expect in December, the CEO of Mas Africa Ghana, John Michael Appiah Acheampong, said “This will be a carnival with costumes that blend both Ghanaian and Caribbean history and traditions. Different Mas bands will be represented and there’s an exciting brass band battle to be had. We are looking to have artists from across the globe as well as DJs for all genres ranging from Afrobeats through Soca, highlife and dancehall right down to Amapiano. The carnival comes off from 15th to 17th December, 2022. We are hoping a lot of organisations and groups get involved and make the Black Star shine bright globally.”

I Speak English That Makes Money For Me – Chairman Wontumi mocks