Massive Registration Ahead Of Millennium Marathon 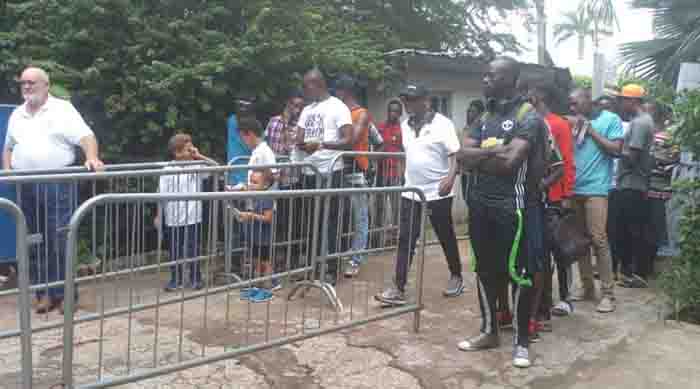 With barely a month for the major Millennium Marathon to start, Ghanaians and foreigners alike have stepped up registration after the first official desk was mounted at the Zen Gardens, opposite Elite Sports at Labone in Accra.

On Saturday, three lucky winners emerged during the seventh draw of the special raffle to mark the opening of registration points in the country.

And for the second time running, the draw took place at Elite Sports Shop, which donated assorted sporting products to the winners.

Wisdom Adika, a footballer, who plays for Zenaps FC, Sefanya Ameya Adadevoh, a goldsmith and Bombardier Ibrahim Abdul Mumin, a soldier from the Artillery Division of the Volta Barracks, emerged as the winners.

Founder and Chief Executive Officer (CEO) of Elite Sports Wael H. Hakim, who donated a treadmill for the winner of the 2018 race, said he has been a partner of the Millennium Marathon since it began four years ago and encouraged Ghanaians to cultivate healthy lifestyles.

He added that “the international event has made Ghana the focal point for marathon lovers worldwide.”

Alan Beales, one of the Millennium Marathon 2018 Ambassadors, who was very excited, congratulated the fans, guests and patrons.

Ambassador Ashim Morton, Director of the Millennium Marathon Ltd, announced that the registration had been extended to September 20, and urged prospective runners to register and pick their running vests and gifts from the sponsors at the Accra Stadium, Frankies Hotel, Osu, Decathlon, Junction Mall, Nungua and Beautiful Beneath, East Legon, as well as the Office of the Millennium Marathon at Nima.

“Such big international sports event needs to be funded, and I appeal to Corporate Ghana to take up the title of headline sponsor,” he said.

The event is being supported by the Accra Metropolitan Assembly (AMA), as well as Ministries of Youth & Sports and Tourism.