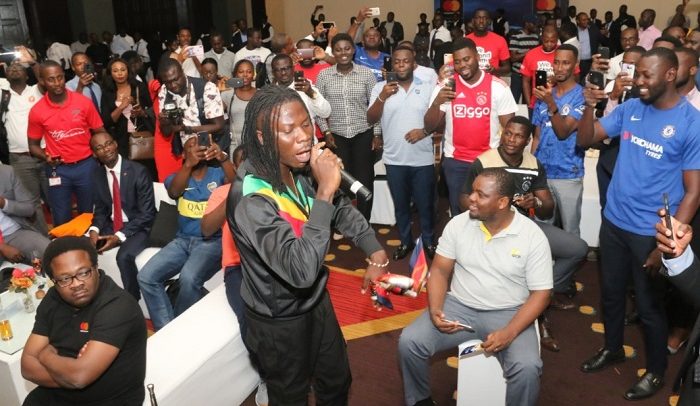 Stonebwoy performing at the event.

Mastercard, in partnership with UEFA, handed its customers a football treat with a public viewing event on the Ajax-Tottenham Champions League semi-final game at the plush Kempinski Hotel in Accra.

The event was aimed at primarily offering a networking platform for Mastercard customers in a relaxed atmosphere.

Customers were handed the luxury of watching the game live on giant screens amid the serving of finger-licking foods, drinks and a buffet dinner.

Two thousand and one UEFA Champions League winner Sammy Osei-Kuffour shared his experience in playing in the competition and what makes it a special competition every player dreams of participating in.

The former Black Stars central defender said, “It is the dream of every player to play in the Champions League due to its high stakes and the massive viewership. The packaging and everything makes it even more attractive than the World Cup.”

He commended the two English sides‒ Liverpool and Tottenham Hotspur‒ for making it to the final.

And predicting who would be the ultimate winner, he said amid smile that “per what we have witnessed in the last few days, it is becoming difficult to tip a side ahead of a game until it is over.”

Mastercard is a leading global payments and technology company that connects consumers, businesses, merchants, issuers and governments around the world.