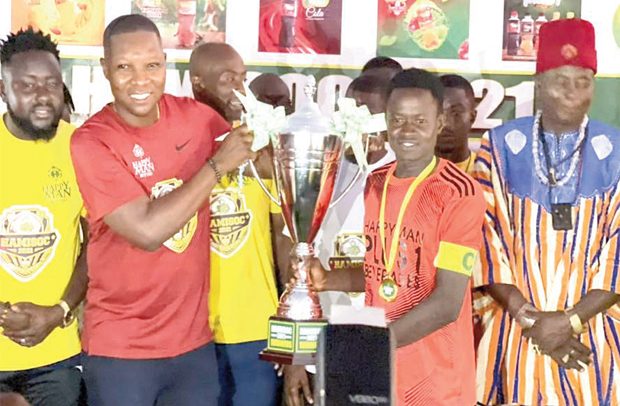 The fifth Happy Man Bitters Inter Community Soccer Competition 2021, ended on a high note on Monday at the COS Park in Navrongo.

Founder and President of Charger Limited, the manufacturers of happy man bitters and happy man plus one beverages, Dr. Emmanuel Bortey Borketey, was also in attendance with his team, as well as the Overlord of the Navrongo Traditional Area, Pɛ Denis Aneakwoa Balinia Adda, the Municipal Chief Executive, Joseph Adongo, the Regional FA Chairman, Salifu Zida, and a host of other dignitaries.

The final match was a tense battle between Mboma City and Mission Warriors, with Mboma City being crowned champions after winning the game, and becoming the only side to win it twice.

The winners received a cash prize of GH¢5,000, a giant trophy, gold medals, training bibs and a set of jerseys.

Individual awards were given to players and coaches for their outstanding performances.

The officiating officials were also presented with golden medals for their exceptional work. The best eleven of the tournament were also selected and duly recognised.

Dr. Emmanuel Bortey Borketey, at the closing ceremony, reiterated his commitment to continue staging the competition to help develop the talents in the various communities.

Dr. Bortey (2nd L) with skipper of the winning side displaying the trophy