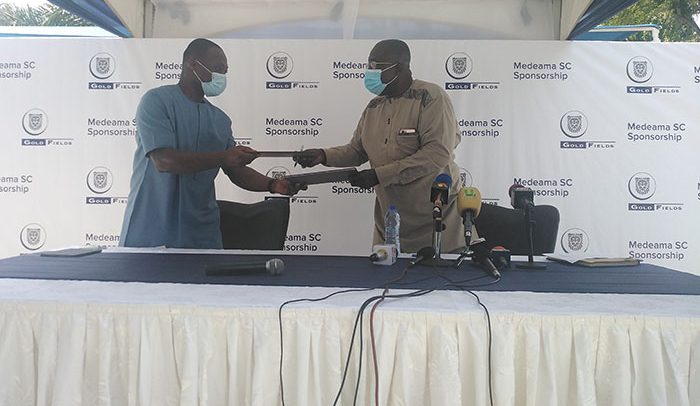 Baku (L) and Aubynn exchanging the signed documents at the event

Gold Fields has signed a $300,000 sponsorship deal with Medeama SC at its corporate office in Accra.

The financial package, which was announced yesterday, takes care of the club’s league and FA Cup programs as well as players and the technical staff salary, accommodation and logistics of the team.

Vice-President and head of Gold Fields West Africa, Alfred Baku, pointed out that the club’s achievement so far in the 2019/ 2020 season prompted his outfit to rally the financial support for the yellow and mauves.

“We continue to support Medeama because we believe that our host communities can develop through the game of football, and also because the club enjoys much support from members of our host communities due to its remarkable performance over the past 12 years,” said Baku.

He added, “Indeed, the club has delivered sterling performances over the years, which is why the Gold Fields Ghana Foundation has once again approved another sponsorship deal we are signing today.

He however stated that Gold Field would keep track of the package to ensure its judicious use.

President of the Club, Moses Parker, who was present with the playing and technical body, expressed thanks to officials of Gold Fields for what he termed as a major boost which would help the club travel far in the coming season.

Medeama will open their season’s account by welcoming Great Olympics at the Akoon Park in Tarkwa. The League is scheduled to kick off next month.