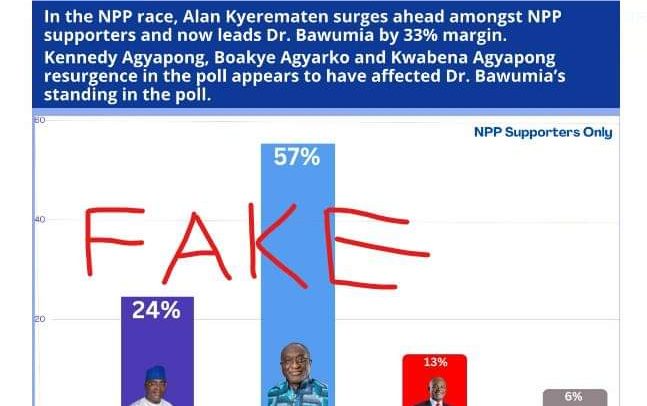 The Executive Director of Global Info Analytics, Mussah Dankwa has described as fake media reports claiming a poll by his outfit has put NPP flagbearership hopeful, Alan Kwadwo Kyerematen, ahead of his competitors.

He has urged the public to disregard fake media reports.

This follows reports after the supposed release of some aspects of a research Global Info Analytics claimed they had done on the NPP flagbearership race.

The Infographic gave Alan Kyerematen a whopping 57 percent lead in the NPP race.

However, the Executive Director of Global Info Analytics has, however, expressed surprise at the infographic and its content, and has asked the public to disregard it as fake.

On his Facebook page, the Executive Director also expressed disappointment in media houses who ran stories on the fake Info graphics without verifying same.

He posted that “I am extremely disappointed in the media houses running with this poll without cross checking it,” Mussa Dankwa said on his Facebook page.

“We release our polls first to the mainstream, then social media platforms and then our website. If you can’t verify it from there, then it is FAKE. Because there is confidence in our work, they would like to associate such polls with us in order to gain credibility. It means we are doing something right.”