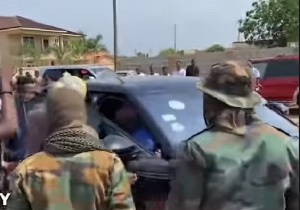 Soldiers who provided security for the traditional wedding between two Ghanaian celebrities at Adjiringanor, Accra, have been arrested.

The presence of the soldiers in uniform at a private function providing security prompted questions about the propriety of their action.

The Director of the Public Relations Directorate of the Armed Forces, Col. Eric Aggrey-Quarshie, said the arrest of the soldiers is intended to maintain discipline within the rank and file of the Ghana Armed Forces, explaining that their private business in providing escort for the wedding without approval was becoming ‘one too many’ hence the need to stop it.

The practice, he went on, was bringing the image of the military into disrepute, adding that soldiers were not for hire to the highest bidder.

The soldiers who were arrested would be investigated and when found guilty could be sanctioned appropriately depending upon the gravity of the offence, but it could range from caution to dismissal, he said.