Meet The 13 New Female MP’s of The 8th Parliament 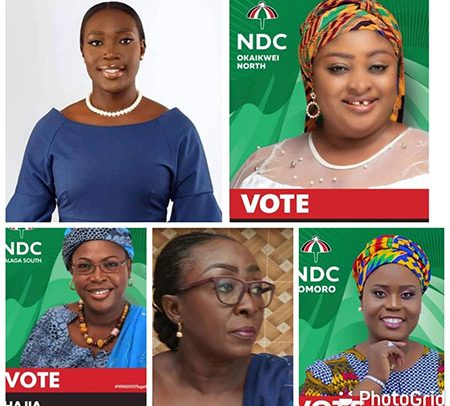 The Fourth Republic, First Parliament had 16 elected females out of 200 MPs. The number increased gradually in the Second, Third, and Fourth Parliament.

Below is a list of new female parliamentarians of the 8th Parliament of the 4th Republic.

Elizabeth Ofosu-Adjare, born on March 1, 1974, is a Ghanaian lawyer and politician who served as Minister for Tourism, Culture, and Creative Arts.

She was appointed to this position by former President John Mahama in 2013 when he formed his first substantive government. In 2020, she contested the Techiman North seat and defeated the incumbent MP, Martin Oti Gyarko with a total votes of 23,252 making 52.53% as against the NPP’s 21,008 making 47.46%.

Lydia Akanvariva Lamisi is a Ghanaian nurse and a politician who contested for the parliamentary seat for the Tempane constituency on the ticket of the NDC and won after the demise of her husband, David Adakudugu.
The late Adakudugu was the NDC candidate for Tempane in the Upper East Region.

The 47-year-old nurse polled 20,939 votes which represent 56.0% of the total votes cast as against Joseph Dindiok Kpemka of the NPP who polled 16,462 votes which translates to 44.0%.
Sheila Bartels –Ablekuma North (NPP)

She contested in 2020 and won the parliamentary seat for Ablekuma North Constituency with votes of 54,821 which represents 64.26% over Ashley Mensah Winifred of NDC 29,772 representing 34.0%.

She made history as the first female to win the La Dade-Kotopon seat in 2020 by obtaining 47,606 representing 53.67% whilst her closest challenger, Joseph Gerald Tetteh Nyanyofio of the NPP polled 41,101 votes representing 46.33%.
She was a former MCE for La Dade Kotopon

Agnes Naa Momo Lartey is a Ghanaian politician who contested in 2020 and won the parliamentary seat for Krowor constituency with 41,850 votes representing 55.80% as against the incumbent MP and Fisheries Minister, Elizabeth Afoley Quaye of the NPP who polled 32,604 votes representing 43.47%.

Ms Lartey began her political career in 2000 since then, she has served as an assemblywoman and a presiding member of the Krowor Municipal Assembly.

Ophelia Hayford, a cop turned politician is a member of the New Patriotic Party who contested for the parliamentary seat for the Mfantsiman Constituency and won with votes of 36,091 which represents 51.83% against James Essuon of the NDC who polled votes of 32,379 representing 46.76%.

She is the wife of the late Mfantiman MP, Ekow Quansah Hayford.

Hajia Lariba Zuwera Abudu is said to be the sister of Vice President, Dr. Mahamudu Bawumia, who polled 32,294 votes to beat her closest contender Abdallah Abubakar of the NDC who polled 30,615 votes.

Gizella Tetteh Agbotui, is a Ghanaian architect and a politician and a sister of Hanna Tetteh, contested the 2020 parliamentary elections and won with 32,708 votes representing 51.58% over George Andah of the NPP who polled 29,832 votes representing 47.05%.

She won after polling votes of 20,525 representing 49.5% against the incumbent Member of Parliament and Savannah regional minister, Salifu Adam Braimah of the NPP who had 19,086 representing 45.90%.

Dzifa Gomashie is a veteran Ghanaian female actress and a former Deputy Minister of Tourism during John Mahama’s tenure of office between 2013 to 2017.
She is currently the MP for Ketu South constituency and a queen- mother in the Aflao Traditional area.
She polled total votes of 84,664 representing 84.14% against her contender David Tiahno Quarshie who also polled votes of 14,904 representing 14.81%.

Dorcas Affo-Toffey-Jomoro Constituency
She is a Ghanaian entrepreneur, philanthropist, and politician and a Member of Parliament for Jomoro constituency on the ticket of the NDC.