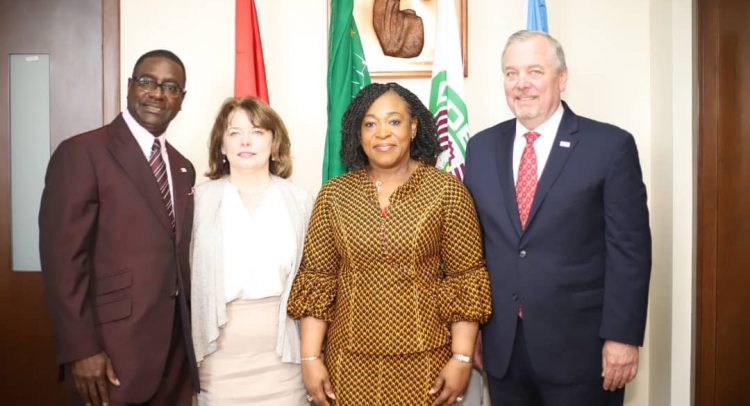 A delegation of the Memphis In May International Festival (MIMIF) from the United States, has paid a courtesy call on Ghana’s Minister for Foreign Affairs and Regional Integration, Shirley Ayorkor Botchwey.

The delegation was led by by the Chief Executive Officer (CEO) and President of the MIMIF Board, James L. Holt.

Ghana has been announced as Honouree Country for the 44th edition of MIMIF.

In that regard, during the whole month of May 2020, Ghana will be projected and afforded the rare opportunity to promote its art and culture, investment opportunities, tourism, cuisine, among others, in Memphis, Tennessee, United States.

As a result, the delegation will be in Ghana from 5th to 12th October, 2019 to among other things, source content for the festival next year.

During the festival annually, educational, commercial, and cultural programmes are organized with the aim of promoting thorough understanding between citizens of Memphis and the honoured country.

The rationale for choosing Ghana, according to the Board of MIMIF, is due to the West African nation’s “stable democracy and a strong economy fueled by tourism, mining, and oil production.”

During the visit to on Tuesday, October 8, 2019, the Foreign Minister warmly welcomed the delegation to Ghana.

She expressed gratitude to the organizers of MIMIF for selecting Ghana out of 24 countries to honour at the 44th edition of MIMIF in May, 2020.

The Minister observed that Ghana had strong bilateral relations with the United States and that it was therefore not surprising that Ghana’s progress has been monitored and rewarded.

According to her, due to the prudent management of the economy since coming into power in 2016, the macroeconomic indicators of Ghana have shown a positive outlook.

She applauded the MIMIF Board of Directors for instituting the Student Exchange Programme aimed at enhancing awareness through education.

She indicated that Ghana was looking forward to hosting the MIMIF business delegation in March 2020.

Over the last 44 years, the city of Memphis has played host to 38 countries.