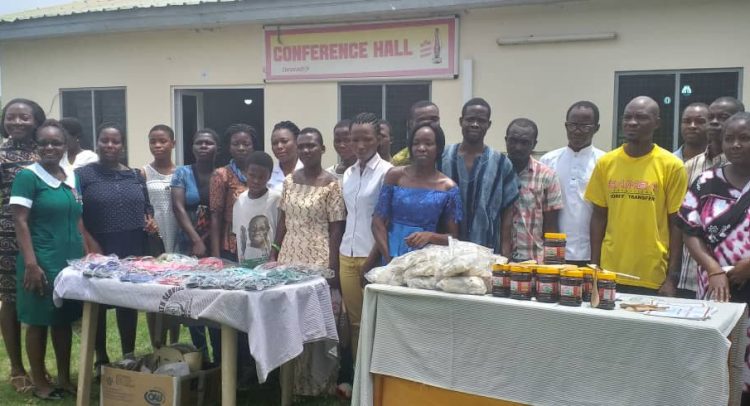 16 mentally challenged persons who have been treated and rehabilitated at the Peki Government Hospital in the South Dayi District of the Volta Region have been given another chance at having a meaningful livelihood.

The 16, who after treatment were being rehabilitated for easy reintegration into the society have been given a variety of vocational skills for nine months, a certificate and start-up support to begin their own businesses to fend for themselves and their dependants.

The gesture was made possible under the hospital’s Mental Health Client Rehabilitation Project (MHCRP) which saw the 16 getting training in mushroom farming, snail farming, bead making and slippers making.

Caretakers of some of the recovered mental health persons who were incapacitated to work were also trained and given support to be able to make a living and care for their vulnerable relations, especially in the purchase of medications.

The rehabilitation project was made possible through a collaboration between the Hospital and the Ebenms Fungi Production with support from the Peki Congregation of the Presbyterian Church of Ghana.

The Head of the Mental Health Unit of the Hospital, Tettey Mercy Sitsofe, asserted that the initiative was geared towards developing the necessary emotional, social, vocational, financial and intellectual skills of the rehabilitated patients so that they can live well in the community and not relapse.

She added that everyone is at risk of mental health challenges just like any other illness hence, the need for all and sundry to support mental health patients instead of neglecting and discriminating against them.

The South Dayi District Director of Health, Patience Nunoo lamenting about the worrying level of neglect and stigmatization against mental health patients by all, especially relatives noted that adequate education, accommodation, rehabilitate and smooth reintegration systems could improve the situation.

She commended psychiatric nurses and other staff for their hard work under limited resources and poor working conditions.

This she supported with the fact that the South Dayi District from 2017 to the first quarter of 2019 has recovered and managed a total of 1,658 mental health cases.

She was worried that 159 and 201 of them were cases of defaulters and relapse respectively due to non-compliance, refusal to turn up for revisit and unavailability of free medicine.

The CEO of Ebenms Fungi Production and the trainer of the beneficiaries, Togbe Dzempe II of Takla traditional area in the Ho Municipality commended the Peki government hospital for the opportunity and said the company hopes to increase its production of mushroom, shito with mushroom base, honey production and snail farming to be able to do more for the mentally challenged.

One of the beneficiaries made a passionate appeal to the government, philanthropists and corporate organisations to support the initiative, so more of their friends get reintegrated.