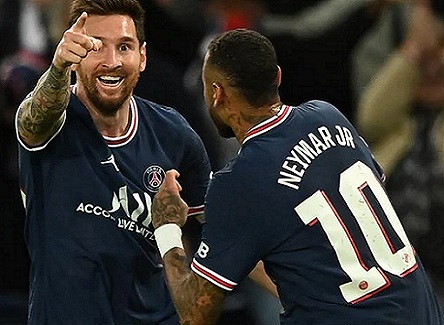 Messi celebrate with Neymar after scoring against Manchester City

Of all the remarkable gifts carried so artfully by Lionel Messi down the years, timing has always sat pretty high on the list.

The timing of a run, of a touch, of a pass. It’s hard to teach, hard to learn and, it seems, equally hard to lose.

In Paris so far, the magician of Barcelona has taken a little time to take the lid off his magic box. Patchy form, a knee niggle and even a passing disagreement with his manager after being substituted a week or so ago had pretty much been the total of his contributions.

But at the Parc des Princes on Tuesday night Messi delivered the first grandstand moment of his new life just when his team needed it.

Mauricio Pochettino’s side were ahead as the game approached the final quarter an hour. Idrissa Gueye – once of Everton and Aston Villa – had scored early on.

However, PSG were not comfortable. Not at all. Just as they had in last year’s semi-final first leg here, Manchester City were pressing urgently in a bid to come from behind and steal the result. It very much felt as though one City goal could become two very quickly.

The English champions were not at their best but they were the dominant team.

Messi had hitherto existed largely on the periphery of the game. With PSG left to play mainly on the counter, his influence had been restricted.

But a surge infield from the right hand side in the 74th minute changed everything. The game, the look of Group A and maybe even the early trajectory of Messi’s career at PSG.

It was trademark, really. A look up to see space ahead and to form a picture of what may be possible and a sharp, hurried run towards the top of the penalty area.

With white shirts converging, Messi released the ball forward to Kylian Mbappe at just the right moment. Perfect timing. Finding Mbappe on his wave length, he received the first time pass back in to his stride and was able to deliver an immediate shot high to goalkeeper Ederson’s left and into the top corner.