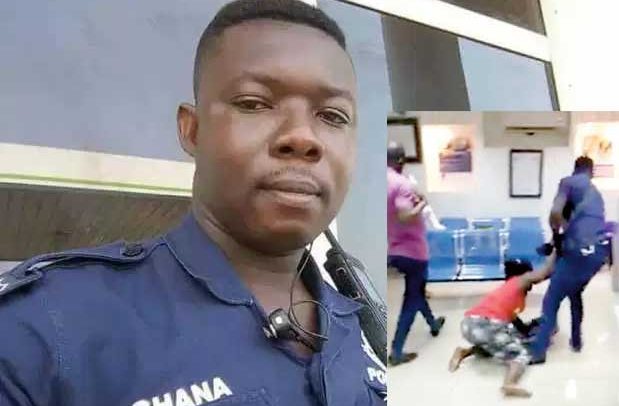 The case involving Lance Corporal Godzi Frederick Amanor, aka Skalla, who assaulted a woman carrying a baby at the Shiashie branch of Midland Savings and Loans in Accra, has been adjourned to September 26, 2018.

The substantive judge is on leave and the case was yesterday taken to another court for mention since the accused persons are on bail.

When the case was called before a relieving judge, M.E. Essandoh, the prosecution and the defence lawyers, agreed to appear before court on September 26, 2018.

Meanwhile, the court has ordered the prosecution to furnish the defence lawyers with the charge sheets and brief facts of the case.

This was after one of the defence lawyers drew the attention of the judge to the fact that they do not have copies of the documents which were presented in court during the first appearance of the accused.

All the four accused persons were in the courtroom, which was packed to capacity due to the huge public interest.

Lance Corporal Godzi Frederick Amanor is before the court on the charge of assault.

The prosecution, led by DSP George Amega, included three staff of Midland Savings and Loans to the case for the various roles they played in aiding the police officer to assault the poor woman.

The police officer’s attack on the woman sparked outrage in the country.

Many Ghanaians, including President Akufo-Addo, condemned the action of the police officer in no uncertain terms.

His alleged accomplices, who are staff of the savings and loans institution, are also before the court charged for abetment of assault.

The three, Joycelyn Kukuaa Fakah, Operations Manager acting as Manager on that day, Shelly Portia Anamang, in charge of customer service and Prince Ayensu, are facing a charge of abetment to assault to which they all pleaded not guilty.

Joycelyn Kukuaa Fakah, according to the prosecution, asked the police officer to drive the woman out of the banking hall which resulted in the assault.

Shelly Portia Anamang, on the other hand, according to the police, watched on while the cop assaulted the woman and did nothing to help her, but rather filmed the incident.

Prince Ayensu has also been accused of helping Corporal Amanor Godzi to drag the poor woman out of the banking hall during the attack.