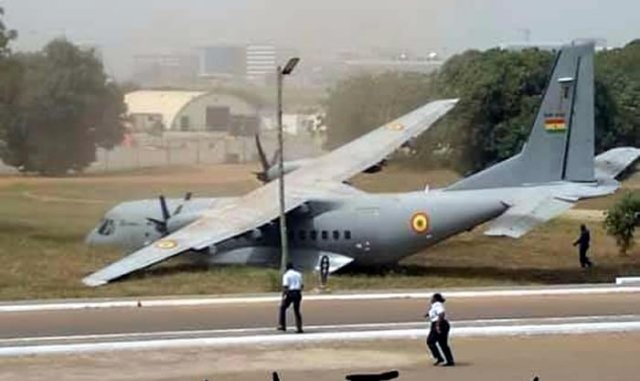 A Ghana Air Force aircraft yesterday overran the apron at the Air Force base during a routine engine-run, a statement from the Armed Force Public Relations Directorate has posted.

The aircraft, a CASA C295 with registration GHF552, had no passenger on board during the engine-run and none of the crew sustained any injury, a statement signed by Col. E. Aggrey-Quashie, Director of Public Relations of the Ghana Armed Forces, said.

A preliminary investigation team has been formed to submit a report within 48 hours even as the manufacturer of the aircraft has been notified, the statement added.

A team from the manufacturers is due in the country to join local engineers to probe the incident further.

The statement added that the aircraft which was manufactured in November 2015 and delivered in February 2016 was due for mandatory check in November 2019. It has been non-operational since October 2019.

The Ghana Armed Forces have assured the public that the Ghana Air Force is operational and that their activities have not in any way been affected by the incident. Morale among personnel is intact as they go about their routine functions.