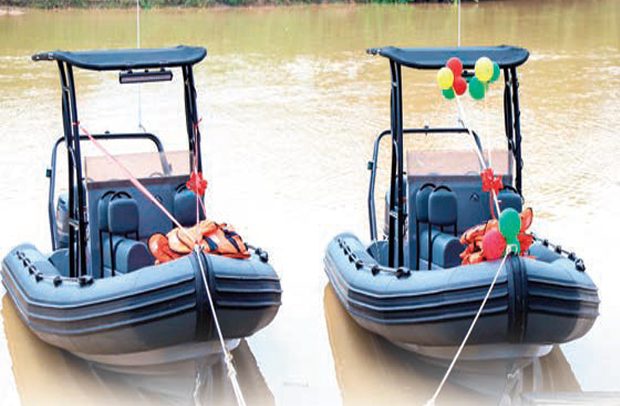 Some of the boats

MINISTER OF Lands & Natural Resources, Samuel Abu Jinapor, yesterday commissioned five patrol boats acquired by government to help fight ‘galamsey’ operations on some major river bodies in the country at Beposo in the Shama District of the Western Region.

The five fully-fitted, six-point-five metres (6.5m) rigid-hulled inflatable boats are to be used, according to the minister, “by the security agencies to patrol the river bodies twenty-four, seven. These will be deployed on Rivers Ankobrah, Prah, Birim and the Black Volta, and they will operate all day and all night, to rid these water bodies of any form of mining. Operation Halt II will continue to support these measures.”

“Today must be a happy day, not only for the residents of Beposo and its environs, but for the people of Ghana, and the millions of people who rely on our water bodies for their livelihoods,” Mr. Jinapor said.

According to the minister, the small-scale mining industry contributes almost forty per cent (40%) to Ghana’s gold output. However, “As a result of its impact on the environment in recent years, small scale mining has, sadly, become associated with environmental degradation and water pollution. These negative environmental impacts reached their crescendo, between 2014 and 2016, with a near total breakdown of the regulation in the sector.”

He said it was because of this situation that President Akufo-Addo, last year, called for a dispassionate, non-partisan and broad-based national dialogue on small scale mining.

“Since then, we have declared water bodies as Red Zones for mining, and suspended all reconnaissance, prospecting and/or exploration activities in Forest Reserves. We have placed a ban on the manufacture, fabrication, and/or use of the floating device popularly known as Changfan, one of the main equipment used for the pollution of our water bodies.

“We rolled out Operation Halt II, to enforce these measures, with an additional mandate to demobilise and decommission all equipment used for illegal mining in Red Zones.

“To promote sustainable small-scale mining, we revamped the Community Mining Scheme, and developed an Operational Manual, setting standards for their operation. So far, a total of thirty-four (34) of these schemes have been commissioned since last year, with an additional eleven (11) ready to be commissioned in the coming days.”

He said the National Alternative Employment & Livelihood Programme (NAELP), which includes reclamation, afforestation and reforestation, already provides direct employment for some 302 people, and indirect employment to over 80,000 people.

“And last month, we marked another important milestone in the fight against illegal mining, particularly, as it relates to the pollution of our water bodies, with the commissioning of 100 mercury-free gold processing equipment, known as Gold Katcha. Apart from their capacity to recover about ninety per cent (90%) of gold from the ore, and thereby giving small scale miners much more gold, Gold Katchas provide an alternative means of extracting the gold without polluting our water bodies and the natural environment.

“Indeed, there are some who have resorted to mining in the night with armed guards, when the security agencies have finished their operation. We have engaged all the sixteen Regional Ministers and their Regional Security Councils, to take these matters up and deal with them upfront.

“The fight against illegal mining must be national concern, and I call on every Ghanaian living everywhere, and particularly communities along the various river bodies, who bear the brunt of these illegalities, to be vigilant, and support us by reporting those involved in these activities,” he added.