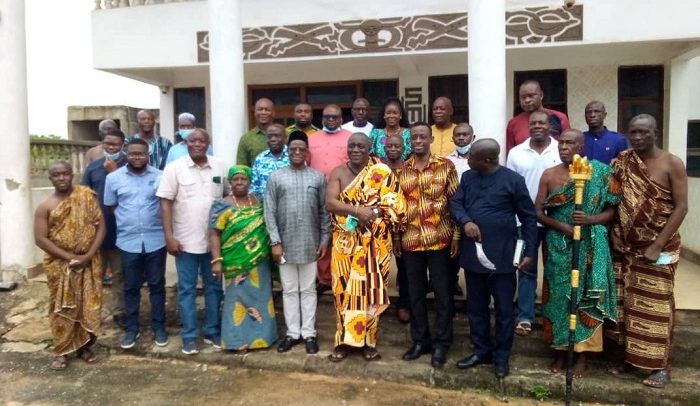 The Minister for Railway Development, John Peter Amewu has warned that the law will deal with recalcitrans persons who have made it a habit to steal properties belonging to the Railway Company Limited.

He lamented that stealing of railway properties by some unscrupulous persons is disheartening.

Recently, the Nkawkaw Police Command arrested a man in the act of cutting a railway track at Asante Praso.

Upon receiving information that some persons were in the act of cutting the lines at Asante Praso, a team from the Command led by ACP/Mr. Kofi Adu, proceeded to the location and found suspect Kwadwo Gyamfi busily cutting some properties belonging to the Ghana Railway Company Limited with the aid of an LPG cylinder.

The suspects loaded the railway lines onto a tricycle (Aboboyaa) and covered it with plantain leaves in a bid to evade arrest.

However, they were arrested by residents and were handed over to Twifo Ati-Morkwa police.

Reacting to the issue for the first time, the Railway Development Minister remarked “It is disheartening to note that if we construct the rail lines, some people will come to steal them. This practice will not help anybody and so those who are involved should stop”.

His first point of call was at Essikado where he paid a courtesy call on the Omanhene of Essikado Traditional area, Nana Kobina Nketsia V.

The Minister was proud to note that the kind of facelift that had been given to the sector in the western region within the past four years, is unprecedented.

He said lots of job opportunities had been created with the revamping of the railway sector.

Nana Kobina noted that stealing of rail lines and other prooeri is anti Ghanaian and wondered why should some people engaged in such criminality.

He said “We at Essikado want to see the railway system operating effectively in the interest of Ghana.

The Paramount was happy that the railway sector currently employs people irrespective of their political affiliations and urged the minister to continue with that move.

He described Joe Ghartey, the former minister for the ministry as the best performing minister.

He told the minister “Note that railways workers fought for Ghana’s independence and I pray the president and the finance ministry will give you the necessary support to continue from where Joe Ghartey left off”.