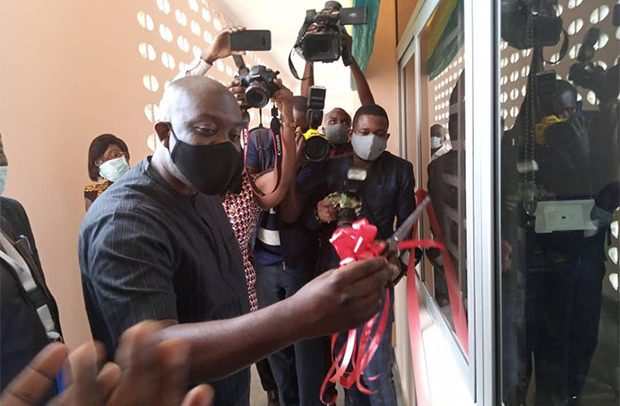 Under his leadership – the Information Ministry – which was prior to coming into office of the NPP Government in a very poor State – has seen major renovation works.

Upon assuming office as a Minister, one of his immediate major interventions was the refurbishment of the Information Ministry’s Conference Room which under the NDC administration was a ‘hub of broken chairs.’

In his drive to promote the gathering and dissemination of national data in a conducive environment, the Minister has through the support of NPA, ADB, and GIFEC, refurbished and commission the National Information and Research Centre.

The Information Unit was earlier commissioned by the Vice President on behalf of the Ministry.

And on Monday, June 1, 2020, the Minister with support from officials of ADB, GIFEC, and NPA, commissioned the Research Unit.

Both units are situated within the Ministry of Information.

The Centre is to give information to Ghanaians nationwide on a retail basis, according to Deputy Information Minister, Nana Dokua Asiamah Adjei.

Mr. Oppong Nkrumah says every computer at the unit is mapped to each of the 16 regions.
He says the Unit will help the Ministry and the Information Services Department in scientifically gathering data and disseminating same nationwide.

He disclosed that since the Vice President earlier this year commissioned the Information Centre, there have been 500,000 engagements from citizens.

According to him, the Unit is helping the ministry to have a proper sense of what is happening across the country and properly inform central government.

However, he bemoaned that the research service department has for a long time been in a very bad state; no computers, workers have had to bring their own laptops.

He therefore thanked Mr Nkrumah for his visionary leadership.