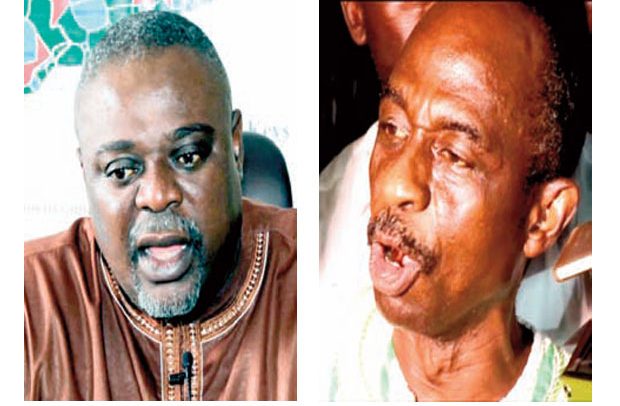 Two gurus of the opposition National Democratic Congress (NDC), who are vying for a top post in the party, are at each other’s throat.

Koku Anyidoho, who is the NDC’s Deputy General Secretary in charge of Operations, is busily campaigning to unseat his boss, Johnson Asiedu Nketiah, the substantive General Secretary and the ‘dog fight’ has intensified.

Mr Asiedu Nketia, popularly called General Mosquito, for the first time since he became General Secretary, is facing stiff competition from Koku, who has vowed to snatch the post from him.

The ‘fight’ started somewhere in October 2017, when Koku was quoted by various media outlets as saying that his boss Mr. Asiedu Nketia had ‘blessed’ him to go for the post because he would not seek re-election when nominations open.

An Accra-based private station, Rainbow Radio, then published that the NDC General Secretary had asked Koku to abandon his plans to contest him suggesting that General Mosquito has had a change of mind.

Mr. Asiedu Nketia was even reported to have sent some emissaries to Koku to persuade him to step down.

According to Rainbow Radio, he (Asiedu Nketia) had ‘admitted’ that he told Koku to contest because he was no longer interested in the post.

In the ensuing heat Koku, in interviews, appear to confirm reports that Mr. Asiedu Nketia initially told him to go for the post but later made a U-turn.

Koku cannot be ‘bought’ by anyone in the party and vowed not to abandon his dreams of becoming the General Secretary.

After picking his nomination forms last week for the contest, Koku again said he would help to unseat what he called “the incompetent New Patriotic Party (NPP) under the leadership of President Akufo-Addo, who has failed woefully in fulfilling his campaign promises in 2020.

Using innuendos, Koku said he is not ‘scared’ of any candidate vying for the General Secretary position.

He said “the race is not about insults, it’s not boxing; we are not in the race to insult anybody. I have decided to contest as General Secretary with the message of party first. The party is supreme and we must work for the party at all levels in order to rebuild it and bring it back to power in 2020.”

Mr. Asiedu Nketia, who appears to have enough of Koku’s tantrums, reacted by ‘exposing’ his subordinate for peddling ‘falsehood’ about him.

He said, “I saw a headline on one of the portals that I have pleaded with Koku Anyidoho to step down for me to go unopposed. I called that radio station, Rainbow Radio, and asked them where they got that story and also expressed my reservations about it since the headline and body of the story did not match. They gave me the opportunity to give my side of the story.”

“He sent Dr Carl Max, Hon. Kofi Attoh, Vida Addei, who is the Deputy National Treasurer, to apologise to me. He also asked Mr Yaw Boateng Gyan to join them but Yaw couldn’t come, and so it was Koku who apologised to me for that falsehood.

“These are confidential matters that I would have kept to myself, but due to the controversies that are emerging, I am forced to come out and set the records straight.”