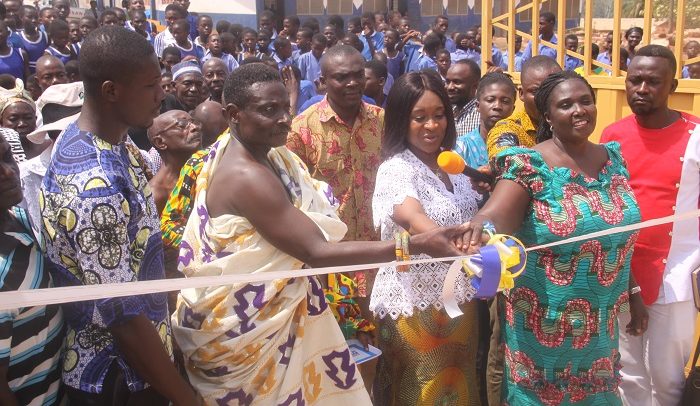 The New Patriotic Party (NPP) Member of Parliament (MP) for Atiwa East, Abena Osei-Asare, has commissioned a kindergarten school and a 10-seater water closet for the Adesewase Presbyterian Basic School and the people of the town

In addition, she also commissioned two 10-seater water closets at Anyinam and Jejeti to be used by the people in both towns.

The MP funded these projects from her common fund and her personal resources.

Commissioning the kindergarten school at Adesewase, the Atiwa East MP who is also a Deputy Minister of Finance, said education, health and sanitation issues had been her priority as an MP.

According to her, apart from providing classroom blocks and ICT centres for some basic schools in her constituency, she has also completed the girls’ dormitory for the Sekyere SDA Senior High School through the GETFund to help enroll more girls into the school.

She also said that she had provided 41 computers to furnish the school’s ICT centre and also provided streetlights to help beef up security in the school.

She said she was ready to do more for the constituency and asked the chiefs and people of the area to stand solidly behind her to ensure accelerated development of the Atiwa East Constituency.

Meanwhile, the deputy minister has picked her nomination forms to re-contest the primaries. The constituency executives of the party and jubilant supporters accompanied her to pick her forms.

The chairman of the constituency, Albert Antwi Boasiako said the performance of the MP and the government had been outstanding.

He said it was in view of this that the whole party in the constituency was supporting her to lead the party again for massive victory in the 2020 general elections.