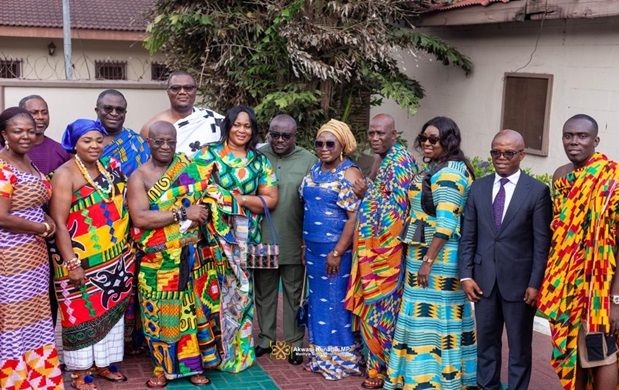 Osei Kyei-Mensah-Bonsu, his wife and some MPs at Manhyia

MEMBERS OF Parliament (MPs) from the Majority caucus on Wednesday joined their Leader, Osei Kyei-Mensah-Bonsu in Kumasi, to mark his 5th anniversary of his enstoolment as Sompahene of the Suame Constituency for his servant leadership.

The hardworking lawmaker and his wife, Mrs. Irene Kyei Mensah-Bonsu, were honoured by the chiefs and people of the constituency some five years ago, by installing the two as Sompahene and Sompahemaa respectively, for the MP’s contributions to the development of the area over the years.

The historic ceremony, which was held at Breman, was graced by President Akufo-Addo, and the then Speaker of Parliament, Prof. Mike Oquaye, as well as some Ministers of State.

The month-long celebration climaxed Wednesday, with some MPs joining the Majority Leader at Manhyia to pay homage to the Asantehene, Otumfuo Osei Tutu II.

Before this event, there was a colourful ceremony held on Friday, December 2, 2022, at the Breman R/C School Park to celebrate the anniversary.