My Son Is Not Involved In Galamsey – Frimpong-Boateng 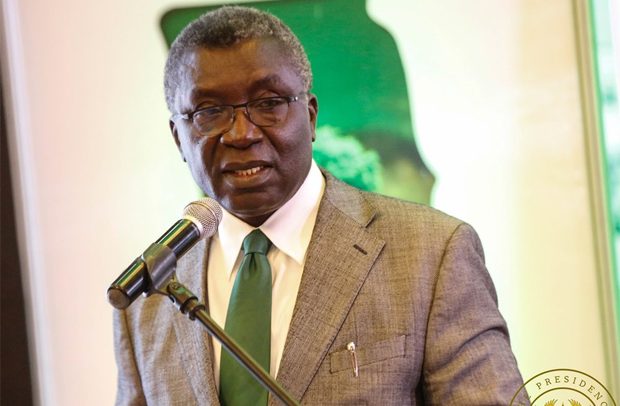 The Minister of Environment, Science, Technology and Innovation, Professor Kwabena Frimpong-Boateng has denied allegations that his son, Jojo Frimpong-Boateng is involved in mining in Ghana’s forest reserves.

He indicated that such allegations are untrue.

Prof. Frimpong-Boateng issued the disclaimer in an interview with journalists on Thursday after the President’s State of the Nation Address.

Prof. Frimpong-Boateng told journalists that “he [his son] is not involved in anything and the world will get to know soon.”

There were some reports that a company linked to the son of Prof. Frimpong-Boateng, Jojo Frimpong Boateng, was involved in illegal mining.

The reports were trumpeted by some members of the opposition National Democratic Congress (NDC) as well as the Assin Central legislator, Kennedy Agyapong.

Kennedy Agyapong had alleged that some mining excavators seized by the government from alleged illegal miners had been given to Jojo Frimpong-Boateng through Ekow Ewusi who is currently being held by police over the disappearance of seized excavators.

Speaking on his Net2 television, Kennedy Agyapong said, “How can you seize people’s excavators for illegal mining and turn around to give it your son for his mining activities?”

‘I have never taken bribe before’

The Minister in the interview also denied any involvement in alleged corruption in the fight against illegal mining.

There have been calls for him to resign or be axed during the aftermath of revelations about the disappearance of hundreds of excavators seized from illegal miners.

The Ranking Member on the Mines and Energy Committee of Parliament, Adam Mutawakilu, even called for his arrest.

However, the Minister remained resolute when queried on the matter insisting that the state will get to the bottom of the controversy.