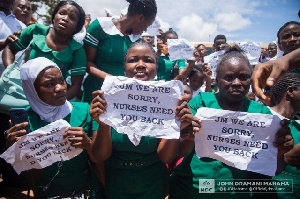 Management of the Nalerigu College of Nursing and Midwifery has condemned some of its students for their “shameful conducts” during their meeting with former President John Mahama.

A video from Mr. Mahama’s visit to Nalerigu shows some purported nursing students kneeling down and begging him for forgiveness apparently for voting against him and as well criticizing his administration for scrapping the nursing training allowance.

They also expressed frustrations with the health policies of the NPP administration, particularly with respect to the welfare of nurses and nursing trainees.

But management of the College in a statement, dissociated itself from the conducts of the students.

It explained that “from the audio-visual material, it is noted that those individuals in the nursing trainee uniform: knelt down in response to a voice instructing them to do so and thereafter rendered an apology to the former president for not voting for him last presidential elections.”

It added that “we wish to state the following: the unfortunate incidence did not take place on the premises of the college but rather around the overlord of Mamprugu’s place “

According to the statement, “these students were transported there without the knowledge and approval of the management.”

“These students have benefited fully from the students trainee allowance, following its restoration by the government,” it stressed, adding “that some of the individuals in the nursing trainee uniform are not known to be students of the institution.

In the light of the foregoing, it said, “the management hereby wishes to state that the views and comments expressed by these individuals in nursing trainee uniform do not in any way represent the views and policy orientations of the institution and that of the generality of its students.”

In order to forestall the recurrence of similar incident, it revealed, the college has launched a full-scale investigation into the incident since there appears to be potential breaches of the student conduct codes/rules and regulations of the college.

Pwalugu Dam Will Be Largest - Bawumia