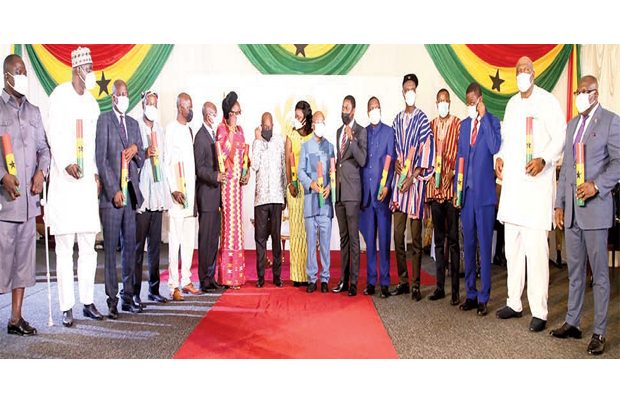 President Akufo-Addo with regional ministers in a photograph after the swearing-in ceremony at the Jubilee House. Picture by Gifty Ama Lawson.

President Akufo-Addo has asked all 16 regional ministers to ensure total peace and security in their respective regions.

He does not want a situation where there will be a breakdown of law and order, thereby creating a state of insecurity in any of the regions.

That, he said, would not only retard development but create a sense of insecurity amongst the populace.

This was at a swearing in ceremony event Thursday evening at the Jubilee House at which he administered the oaths of office, secrecy and allegiance to all 16 ministers.

He reminded them that “as chairpersons of the Regional Coordinating Councils of your respective regions, you have the most regular and direct impact on the lives of the people. You set the tone for the administration and development in your regions. Another important role you play is that of chair of the Regional Security Council. You do not need me to tell you that your most important function is to help ensure peace, law and order in your regions.”

That, he said, was because “all our plans and programmes will come to naught if there is no peace.”

That was however not without a caution, “you must be careful and tactful in managing issues of intelligence and security.”

He therefore urged the regional ministers to know that they had a responsibility to take up all the duties of a Regional Minister as stated in the 1992 Constitution of the Republic.

“Article 256 of the Constitution of the Republic, outlines your responsibilities succinctly. You represent the President in the region, and you are responsible for the coordination and direction of the government administrative machinery in the region. As you all already know, i have taken the decision not to appoint deputy regional ministers, this means you have to shoulder the work by yourselves as I know you can,” President Akufo-Addo said.

Dr. Letsa, the Minister for Volta Region, on behalf of his colleagues promised to do everything within their power to support the vision of the President aimed at bringing development to every one of the 16 regions in the country.

“We want to assure the President, the good people of Ghana and our regions that we shall take this assignment with seriousness, dedication, commitment and loyalty that it deserves. Mr. President, on behalf of my colleagues, I promise that you can always count on us. We will be your worthy representatives in all the 16 regions of our beloved nation, Ghana,” Dr. Letsa noted.