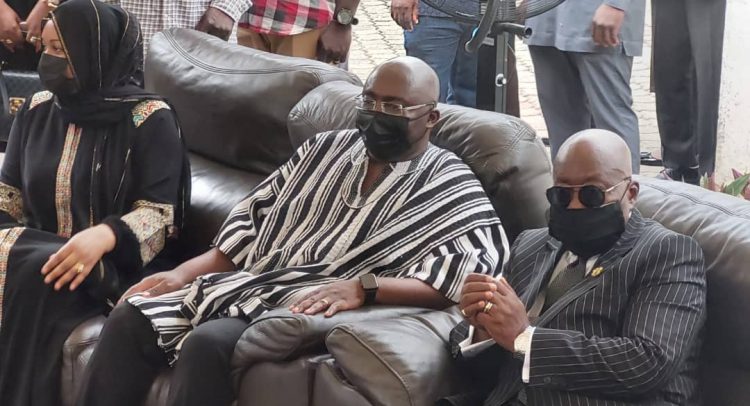 President Akufo-Addo with Dr Bawumia at his residence

President Akufo-Addo has visited Vice President Bawumia at home to commiserate with him over the passing of his mother.

The 82year old mother of the Vice President, Hajia Mariama Bawumia died in the early hours of today, Monday, September 13.

Burial is scheduled for tomorrow, Tuesday September 14, 2021 in Walewale.

People from all walks of life have since been trooping to Dr Bawumia’s Kanda private residence to commiserate with him since news of his late mother’s death broke in the morning.

He had the honour of receiving President Akufo-Addo and his wife, First Lady, Rebecca Akufo-Addo, Chief of Staff Akosua Frema Osei Opare and other government officials Monday a while ago. 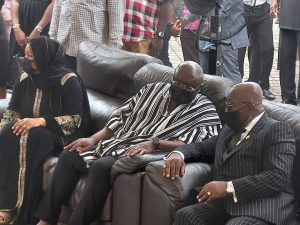 A native of Kpasenkpe in the West Mamprusi District, Hajia Mariama was one of the first Northern female students to gain admission to the prestigious Wesley Girls’ High School in Cape Coast in the Central Region. 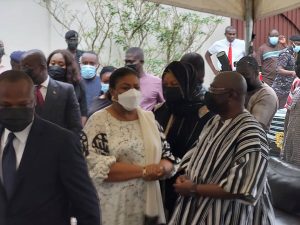 During her 80th birthday in 2019, Dr Bawumia in a Facebook post described her as “the pillar of my life”.

“I always thank the Almighty God for giving me such a caring and supportive mother. She has always been there for us. The pillar,” he said in that post.

President Akufo-Addo described the late mother of Vice President Bawumia as a delightful and courteous lady who took good care of everyone she met or encountered.

Writing in the book of condolence opened in honour of the late Mariama Bawumia, he asked for God’s blessing on her and for a peaceful rest in the bosom of the Lord.

“My wife Rebecca and I came to express our condolences and sympathies to the Vice President and his family at the sad loss of his mother. She was a delightful and courteous lady who looked after us very well at the occasions that we met her here and at Walewale. We ask for God’s blessing on her and for a peaceful rest in His bosom. May her soul be at peace” was how he put it.