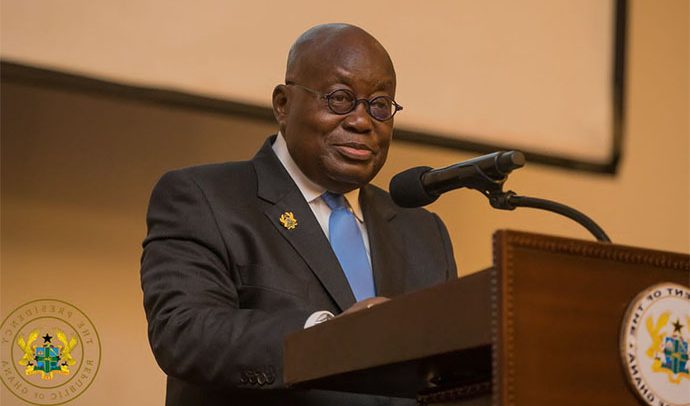 President Akufo-Addo has had course to issue a string warning to Metropolitan, Municipal and District Assemblies (MMDCEs) spread across the country to ensure strict compliance to building regulation.

Speaking at the commissioning of new equipment by local dredging company, Dredge Masters, a subsidiary of the Jospong Group of companies to its existing fleet at Adjei Kojo near Ashaiman in Accra this morning, he complained bitterly about the issue of perennial flooding especially in the capital city, Accra.

The equipment which is estimated to cost €54million includes the new IHC Beaver 50 dredging and marine equipment.

Whilst he admitted that some of these flooding are natural occurrences, the President said most of them are also caused by human activities, relative to peoples behaviour by disposing off waste indiscriminately.

For him, “it is obvious from recent events that more needs to be done to deal with the situation [flooding] permanently.”

Even though he said government will continue  to work towards the day Ghanaians, especially those in Accra will live in calm and tranquillity through the rainy season, the President however charged Metropolitan, Municipal and District Assemblies (MMDAs) to ensure obstructions to the free flow of water, as well as developments along waterways are removed immediately.

Apart from that, he also said “MMDAs are also to ensure the strict adherence of developers to the planning laws of our country and sanction staff who have issued permits for structures to be built on waterways to serve as a deterrent to others who seek to engage in such acts.”

To ensure that these directives are strictly complied with, the President has established a monitoring unit at the presidency (Jubilee House) that will be reporting directly to him on the progress of the implementation of these measures.

He has thus put all MMDCEs on notice that they will be held accountable for any breaches that will result in damage from flooding.

As President of the Republic,  he gave his word “I will not allow this selfish acts of a few to jeopardise the collective futures of the rest of us.”

While government does its part, he said “we cannot overlook the negative effects of dumping of refuse into open drains by some unpatriotic citizens.”

That, he said was because “regardless of the investment that is made in the construction of one engineer drain, the indiscriminate disposal of solid waste into open drains and channels will reduce our capacity to end the perennial problem of flooding.”

The President have thus urged all who engage in indiscriminate dumping of refuse and building on waterways to put and end to them since they will equally be made to face the full rigours of the law.

Dredge Masters is a wholly owned Ghanaian company Ghanaian company and leading provider of what is said to be cutting edge dredging, sea defence, coastal protection and related marine services in Gyama and across Africa.

It is an ISO certified company with focus on sustainable development and prides itself as having some if the best technical engineers and hydrological engineering experts.

Former Sawla-Tuna-Kalba MP To Be Buried On July 2