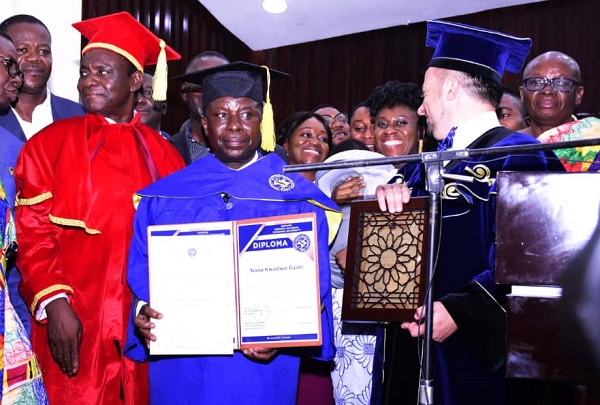 NANA KWADWO Gyasi, a popular businessman and a philanthropist, has been awarded Honorary Doctorate Degree for his entrepreneurship and philanthropic works.

An Elder of the Church of Pentecost, Nana Kwadwo Gyasi, was awarded the Honorary Doctorate Degree by the Ternopil National Economic University of Ukraine during a colourful ceremony in Kumasi last Saturday.

The honour was in recognition of his outstanding achievements, enormous dedication to humanitarian services and tireless efforts in ensuring the socio-economic wellbeing of many people.

Nana Kwadwo Gyasi was given a standing ovation as his long list of accomplishments for the country and beyond was read at the Great Hall of the Kwame Nkrumah University of Science and Technology (KNUST).

“His accomplishments in Ghana and beyond after all his assessment have earned him this honour”, part of a citation presented by Ternopil National Economic University of Ukraine read.

The event was under the auspices of the Bureau of Research on Governance, Commerce and Administration (BORGCA) and the Confederation of Governance Assessment Institute (COGAI).

Other prominent Ghanaians were also awarded with Honorary Degrees on the day but Nana Kwadwo Gyasi’s award was a standout. The noise that welcomed him to the podium was deafening.

The “TERNOPIL NATIONAL ECONOMIC UNIVERSITY’ deems it fit to confer upon you: DOCTOR OF PHILOSOPHY (Honorary Degree) under the auspices of the ‘CONFEDERATION OF GOVERNANCE ASSESSMENT INSTITUTE’ – (COGAI).

“TERNOPIL NATIONAL ECONOMIC UNIVERSITY congratulates you on this noble achievement to be bestowed on you. You are a worthy model entrepreneur, a staunch philanthropist and a beacon of hope to the next generation in Ghana, Africa and beyond”, the citation read.

Nana Kwadwo Gyasi, without a doubt, has carved a niche for himself in the building and construction industry, boasting of a host of businesses under the umbrella of his famous ‘Nana K Gyasi Company Limited’.

Nana Kwadwo Gyasi, who was beaming with smiles after being decorated with academic robe, told DAILY GUIDE that the award was an indication that his positive works for mankind had been recognized.

Nana Kwadwo Gyasi, who looked overly excited, thanked God, his wife, children, church members and workers of his company for their support, which has made it possible for him to be honoured.