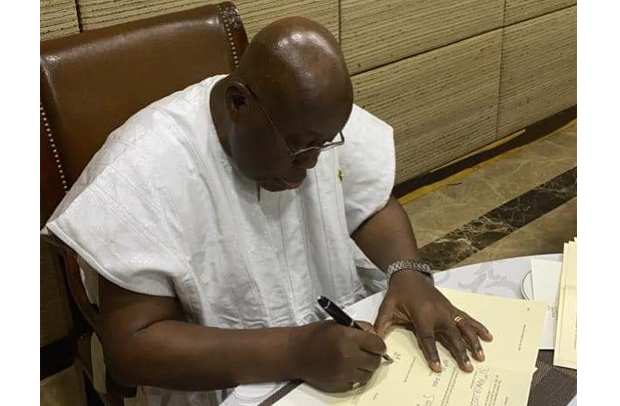 The Electronic Transfer Levy, otherwise known as the E-Levy, yesterday received the presidential assent after President Akufo-Addo appended his signature to the policy document from Parliament.

The presidential assent was the end of the tortuous journey which the subject embarked upon from the time of its announcement a few months ago to the time it was laid before Parliament, the out-of-the House propaganda and the ultimate process on President Akufo-Addo’s desk yesterday.

A hint about the presidential assent happening later this week was dropped by Osei Kyei Mensah Bonsu, Minister of Parliamentary Affairs and Majority Leader during a press conference shortly after it scaled the parliamentary hurdle.

Now that the subject is no longer in the works and a law, all electronic money transactions would mandatorily attract a 1.5 per cent charge.

Following the acrimony the subject endured, a downward review compromise was made by government. This nonetheless failed to placate the Minority in Parliament, who maintained their stance of rejecting the subject.

Their walkout last week however did not stall the process.

During the press conference, the Parliamentary Affairs Minister said, “President Nana Akufo-Addo will assent the bill by the close of the week,” when he fielded a question from a journalist.

The presidential assent was preceded by a fine-tuning process of the bill by a parliamentary committee just so the relevant clauses were appropriately and duly captured before presentation to the President for his signature.

For an economy suffering the global aftermath of COVID-19, a tax system which cannot be evaded as are others, only an E-Levy fits the bill, said crafters of the bill now law.

A fractious subject that it was, government embarked upon a town hall engagement to explain the importance of the bill. It was an approach which was necessitated by the muddying of the waters by political interest groups.

Following its presentation to Parliament under a certificate of urgency a few months ago, both sides of the House debated over it, the ambience often acrimonious.

The Adwoa Safo factor added to the already muddy subject. The Dome-Kwabenya MP has been away from the country for a long time, leaving many to wonder whether her action was not intended to throw spanners into the works of government.

During the second reading on Tuesday, the Minority Leader, Haruna Iddrisu, did not mince words when he said regardless of the mutation the bill had gone through, his side would have nothing to do with it.

“Mr Speaker, the Minority led by me will not be associated with any further proceedings on E-Levy,” he said.

This was followed by a walkout action which did not help their cause anyway.

The second and third readings proceeded, and subsequently the bill was passed.

Having been amended from 1.75 per cent to 1.5 per cent on Tuesday, March 29, 2022, and passed under a tax on electronic transactions, it touches mobile money payments.

The charge would apply to electronic transactions that are more than GH¢100 daily.

Those who are opposed to the law think that it would aggravate the already precarious financial health of especially low income earners.

The government has on the other hand argued that it would widen the tax net and raise an extra GH¢6.9 billion in 2022 and also restore confidence in our economy.

The Minority is still sulking over the E-Levy’s passage into law, and have already dashed to the Supreme Court for a reversal of the process.