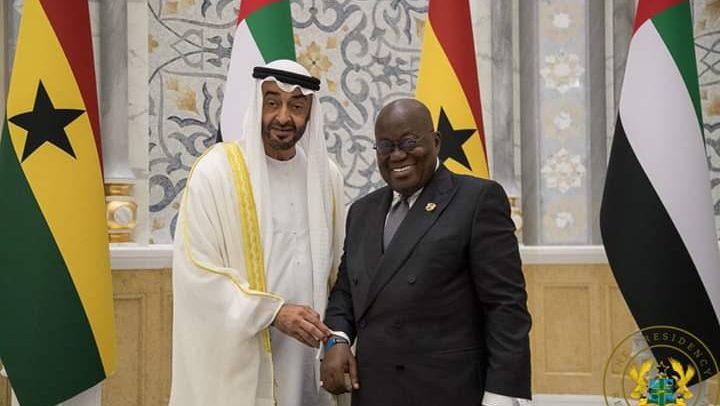 President Nana Addo Dankwa Akufo-Addo has engaged with five chiefs of the Emirates making up the federation of the United Arab Emirates (UAE) during his one-day trip to the country yesterday, resulting in the signing of five co-operation agreements and memoranda of understanding.

The signing covered different sectors of the respective economies of the countries making up the Emirates. They are aimed at deepening the ties of co-operation and the bonds of friendship that exist between the two countries.

The President’s visit is at the invitation of Sheikh Mohammed bin Zayed Al Nahyan, Crown Prince of the Emirate of Abu Dhabi and Deputy Supreme Commander of the United Arab Emirates Armed Forces.

The agreements signed were: Memorandum of Understanding between the governments of Ghana and the UAE on exemption of entry visa requirements, Agreement for the Promotion and Reciprocal Protection of Investments, and Agreement for the Avoidance of Double Taxation and the Prevention of Fiscal Evasion with respect to taxes on income between the Government of Ghana and the Government of the UAE.

Speaking with Sheikh Mohammed bin Zayed Al Nahyan prior to the signing of the eight agreements, President Akufo-Addo said the relationship between Ghana and the UAE over the years had been excellent.

The President explained that effective co-operation with the UAE and investments in the Ghanaian economy were extremely essential to helping deliver progress and prosperity to the people of Ghana.

With all macroeconomic indices pointing in the right direction, coupled with the creation of one of the most business-friendly environments in Africa, the President described Ghana as a safe haven for investments and encouraged members of the UAE private sector to come in.

“We have resolved to build a progressive and prosperous country and are drawing inspiration from the success story of countries like the United Arab Emirates. We have also decided to walk hand-in-hand with the private sector and the business community in this journey,” he added.

Sheikh Mohammed bin Zayed Al Nahyan highly commended President Akufo-Addo for the tremendous progress Ghana has made over the past three years since he assumed office, resulting in Ghana being one of the fastest growing economies in the world.

He gave an assurance that he was committed to enhancing trade and investment co-operation between his country and Ghana.

The delegation that accompanied President Akufo-Addo were Shirley Ayorkor Botchwey, Minister of Foreign Affairs & Regional Integration; Nana Asante Bediatuo, Secretary to the President; Alhaji Ahmed Ramadan, Ambassador of Ghana to the UAE; Francis Asenso-Boakye, Deputy Chief of Staff, and a number of other officials.