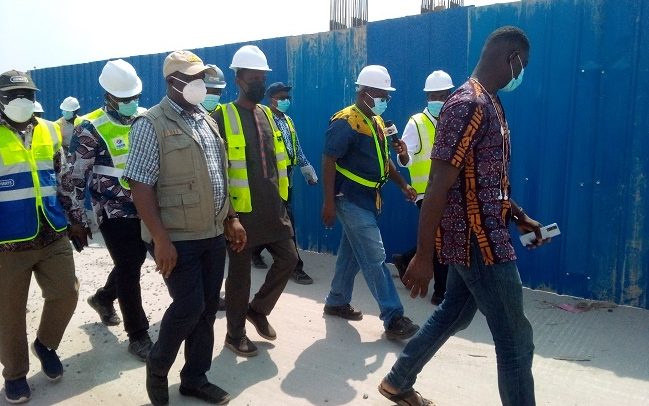 The Minister of Roads and Highways, Mr. Kwasi Amoako-Atta, has given strong indications that come what may, the current government would hand over to another NPP government in 2024.

According to the Roads and Highways Minister, the current Nana Akufo-Addo-led NPP Government is transforming the country’s roads and believed that, the initiative would make Ghanaians retain the current government in 2024.

He said, “I want to promise Ghanaians that by the end of 2024, road infrastructure the Akufo-Addo-led Government would hand to another NPP government, will marvel everyone.”

Mr. Amoako-Atta stated this when he inspected the progress of work at the PTC interchange in Takoradi yesterday.

The PTC interchange, the first of its kind in the Western Region, is one of the Sinohydro projects and it is expected to be completed by mid July, 2023.

The Roads and Highways Minister said due to growth and population increase of Sekondi-Takoradi, the capital of the Western Region, the area was currently experiencing an increase in vehicular traffic, and assured that the problem would be solved when the project is completed.

Mr. Amoako-Atta said the government was aware of the importance of good roads to the country’s development.

He noted, “The main motive of the current government is to improve on the country’s roads in all their forms, be it bridges, interchanges or the roads themselves.

“I promise Ghanaians that by 2024, they will see improved infrastructure by the Nana Addo Dankwa Akufo-Addo-led Government.

“So Ghanaians should continue to believe in the current government because whatever it promised, including the Takoradi and Tamale interchanges, are all ongoing and would soon be completed.”

He said it is the government’s firm belief that road infrastructure represents the pivot around which the economic development of the country revolves, and that the NPP government will not relent until good roads were delivered.

He assured the people of the Western Region that the President was committed to developing the region, which produces a lot of the country’s wealth.

He commended Sinohydro for the progress of work and even working in the night to ensure the project was completed on schedule.

“The PTC interchange is currently about 21 per cent complete and when fully completed would give a facelift to the twin city of Sekondi-Takoradi,” he stressed.

Mr. Kwasi Amoako-Atta, prior to the inspection of the interchange, paid a courtesy on the Western Regional Minister, Kwabena Okyere Darko-Mensah at the Regional Coordinating Council in Sekondi.

He said in view of the wealth that came from the region, it was pertinent that massive work was done to improve the road network in the area.

He indicated that in September last year, the President cut the sod for the construction of the Agona-Nkwanta-Tarkwa road, which is about 66 kilometers, and being constructed by Rango Construction.

“As we speak the road has started and would not stop because the funding is there,” the minister pointed out.

The construction of that stretch of road remains one of the most exciting moment for people in the region, as it offers a major boost for doing business in the area.

The road, which is the vital link between the Western, Central and the Western North regions as well as the port of Takoradi, will reduce travel time, improve healthcare delivery and ambiance for business across the region.

He also indicated that the 35km Takoradi-Agona Nkwanta road is also ongoing and that the Agona Nkwanta-Dixcicove road will also be constructed.

The Western Regional Minister, Kwabena Okyere Darko-Mensah indicated that the government’s key interest in the region was appreciative.

He said some constructors were using the non-payment of their interim certificate as a licence not to continue some projects.

“I am vehemently opposed to this. I know contractors sign full contracts and there is performance bond and financial backing.

“And there is nowhere in the contracts that say that if your interim certificate is not paid, you should stop work. So constructors do not have any excuse to stop work on our roads,” he pointed out.

The Roads and Highways Minister and his entourage later inspected ongoing Apowa-Mpohor and Egyam road projects.