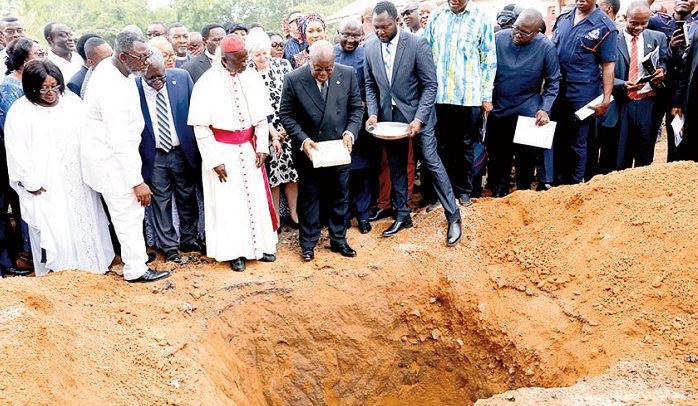 President Akufo-Addo laying the foundation stone brought from Jerusalem, Israel, for the commencement of the Cathedral in Accra. With him is Most Rev. Dr. Samuel Asante Antwi

President Nana Addo Dankwa Akufo-Addo yesterday laid the foundation stone for the commencement of work on the much-talked-about building of the National Cathedral.

A symbolic stone was brought into the country from Jerusalem in Israel for the purpose by the Israeli Ambassador to Ghana.

At a well-attended ground-breaking ceremony held at the construction site at Ridge in Accra, the President thanked God for how far He had brought Ghana and the blessings He continued to shower on Ghanaians.

He laid bare his reasons for supporting the idea of mobilising resources to build the Cathedral, saying “since gaining our freedom from the colonial power 63 years ago on the 6th of March 1957, Ghana has so far been spared civil wars, famine and epidemics, and we are certainly no better than the other nations in our neighbourhood who have been confronted with these challenges. I believe it is by the grace of God that we have been preserved and sustained.”

“The construction of the Cathedral will be an act of thanksgiving to the Almighty for His blessings, grace, favour and mercies on our nation,” the President reiterated.

He acknowledged the fact that “seventy one per cent of the Ghanaian people adhere to the Christian religion grouped under the various persuasions of the Christian faith, for which reason the interdenominational National Cathedral will help unify the Christian community and thereby help promote national unity and social cohesion.”

Also, part was the fact that he made a pledge to God to build a church in His name and honour when He makes him President.

He, therefore, stressed his determination to ensure the completion of the project to honour God. When completed, the President said “I have no doubt that the National Cathedral is certainly going to be one of the iconic structures on the African continent.”

He expressed profound gratitude to members of the Board of Trustees for the Cathedral project and its Chairman, Most Rev. Dr. Samuel Asante Antwi, for taking it upon themselves the responsibility of shepherding the project to ensure completion, especially members of the fund-raising committee led by Archbishop Nicholas Duncan Williams and the celebrated Ghanaian architect, Sir David Adjaye, for their services to Ghana.

The National Cathedral will house chapels and baptistery, a 5,000-seater main auditorium which will be expandable to a 15,000-seating capacity for national events and celebrations.

It will also include, among others, a grand central hall, a music school, and will house Africa’s first ever Bible Museum and documentation centre.