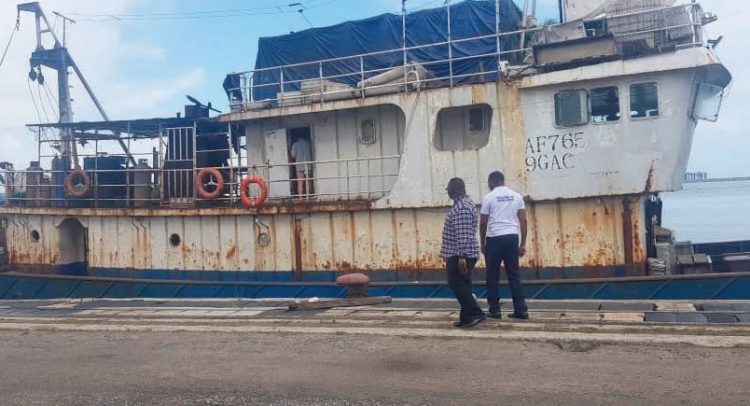 The Western Naval Command of the Ghana Navy has impounded an industrial trawler with the number AF 756 for allegedly engaging in illegal fishing on its way to neighbouring Cote D’Ivoire.

The impounded vessel had Chinese and Ghanaian crew on board who were subsequently escorted and detained at the Western Naval Base in Sekondi.

A joint team of the Fisheries Enforcement Unit, Ghana Navy, Marine Police and Ghana Maritime Authority carried out inspection on the vessel. Personnel of the Ghana Immigration Service were also involved in ascertaining the immigration status of the Chinese crew on board.

Commodore Theophilus Kafui, Command Operations Officer at the Western Naval Command who disclosed this at a press briefing on Thursday, said “certain fisheries infractions” were found on the vessel during the joint inspection.

He revealed that 405 cartons and 864 slabs of frozen mixed small pelagic fish species, generally below the minimum landing size as well as undersized mesh with sizes less than the approved 60 millimetres, were found.

Commodore Kafui added that the Marine Police had brought charges based on the infractions against the captain, the chief engineer and the second officer of the vessel.

He mentioned that two Ghanaian crew on board were, together with the Chinese, put before a Takoradi Circuit Court for engaging in illegal, unreported and unregulated fishing.

He added that the suspects pleaded not guilty to all the charges levelled against them and were granted GH¢500, 000 bail each with two sureties, one of whom must be a resident of Sekondi-Takoradi.

Commodore Kafui said as the case was being heard in court, the counsel for the accused persons and the owners of the vessel as well as their company, Gyinam Fisheries Limited, Wahid Iderisu Wampouri pleaded for out of court settlement.

“So the Fisheries Committee in Takoradi arranged an out of court hearing of the case on October 9, 2019 during which the counsel for the accused persons pleaded guilty to the charges,” he stressed.

He indicated that the counsel for the accused persons also agreed to pay the penalty of $1 million and an additional fine of GH¢124,000 for the fish on board the vessel at the time of the arrest.

“This was in accordance with Section 88A of the Fisheries Amendment Act, 2014 (Act 880). The owner has up to 30 days to effect full payment of all the fines or the case will be reverted to court,” he said.

Why Is South Africa Doing This?