Why Is South Africa Doing This? 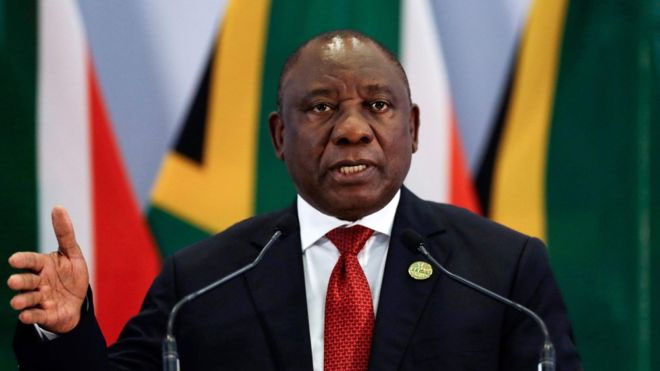 If I could talk to President Cyril Ramaphosa of South Africa, I would tell him this:

Dear Comrade President, do you remember coming to London sometime in the late 1980s presumably in pursuit of international support for COSATU, of which you were then Secretary-General?

I attended a joint news conference you held with the Secretary of the British Trades Union Congress, the late Mr.  Norman Willis. I asked Mr. Willis why he wasn’t asking his British trade union member to stop processing mails and parcels  sent from Britain to South Africa, and vice versa? Did the British trade union movement not realise that many of the Africans the apartheid regime had detained were picked up from “the shop floor”? They needed the solidarity of workers everywhere, especially fellow workers in trade and industry, I added.

Norman Willis brushed the question aside! He confirmed for me the famous statement by the late leader of the PAIGC in Guinea-Bissau, Amilcar Cabral, that “it’s only in fables that you can cross a river in a boat piloted by the crocodile’s friend”!

Of course, British trade with the apartheid regime enriched Britain and its workers a great deal, and the British TUC wasn’t going to disrupt that by taking such a decisive action to help to free a bunch of black workers whose trade union  – and human – rights, were being trampled underfoot, thousands of miles away.

Comrade President, even if you appreciated the import of  the question I asked Mr. Willis on your organisation’s behalf, you  would not necessarily have known that so widespread was the international support for you  and your people that the questioner wasn’t even from South Africa at all, or  indeed, anywhere near it, but from faraway Ghana, in West Africa!

Nowhere else was the support for the black struggle against apartheid waged with such consistency and justified anger as at the United Nations. Every session of the General Assembly and sometimes, the Security Council had an item on its agenda condemning apartheid and calling for the liberation of your oppressed nation. To the annoyance of “the crocodile’s friends”, the UN called for a boycott of the apartheid regime. Some limited sanctions were also imposed on it.

A special anti-apartheid committee was set up, and the Decolonization Committee also refused to allow the South African argument that apartheid was its “internal affair” to prevent it from persistently issuing condemnations against apartheid. The UN was, in fact, the first front of the anti-apartheid war.

One would have thought, therefore, that when the blacks of South Africa achieved victory over apartheid in May 1994, co-operation with the UN would be one of the hallmarks of its foreign policy. But alas, Comrade President, this does not appear to be the case. In September 1961, the Secretary-General of the UN at the time, Mr. Dag Hammarskjoeld, was travelling to Ndola in Northern Rhodesia (now Zambia) in pursuit of peace for war-torn Congo, when his plane was cruelly shot down.

The Secretary-General and 15 other persons on board perished. It has been established that military action was going on in the Congo and the neighbouring countries at the time, carried out by mercenaries recruited and paid by British, American, Belgian and South African companies that had either connections with Union Miniere, the Belgian company that was milking the Congo of copper, uranium, diamonds and other minerals, on behalf of Western shareholders. Behind them stood powerful forces, including the CIA and M16 of Great Britain.

All the Western countries indisputably POSSESS first-hand intelligence reports on how Mr. Hammarskjoeld’s assassination was carried out. But despite requests from the UN that they should release documents relating to the crash to various enquiry bodies set up by the UN, very little has been given.

Currently, an ‘Eminent Person’, Judge Mohamed Othman, former Chief Justice of Tanzania, is in charge of reviewing what previous UN enquiries have done before, and plugging the informational holes in their reports on Hammarskjoeld’s assassination.

As could be expected, the “crocodile’s friends” (in this case, the USA, the UK, Belgium and France, in particular) have steadfastly refused to allow the ‘Eminent Person’ to see all the more important secret documents on the crash. This is in spite of the fact that the information therein is over 60 years old and, therefore, according to their own laws, may be released!

But Comrade President, what is most puzzling is that South Africa has joined the USA and its murderous friends in refusing to release all the relevant documents it possesses to the UN’s ‘Eminent Person’. This is very strange, indeed, because it is known that an employee of the South African Truth and Reconciliation Commission, at great risk to her life, tried to submit some documents that had come into her possession, to the Commission at the very end of its sittings.

However, she was fobbed off by silly bureaucratic niceties placed in her way by a very highly-placed personage on the Commission, for reasons known only to himself. The documents subsequently became “lost”!

Comrade President, it is my considered opinion that you owe the world, on behalf of your country, a moral duty to ferret out all documents relating to the crash and deliver it, without delay, to the UN’s Eminent Person.

Now, Comrade President, we all know, to our chagrin, that some black South Africans do not want to remember the part played by their fellow blacks on the continent in their eventual liberation. But this, Comrade, is not just a matter for the continent, but the whole of the UN. What are the Swedes and other Scandinavians – great supporters of yours – to think? The Latin Americans? The Asians?

No Comrade, please you need to save the honour of South Africa.

Please, you do not owe the apartheid regime any protection. If the ANC agreed to keep the apartheid era’s murderous secrets under wraps, that agreement was invalid. For it was reached by your negotiators under duress.

And international and national laws do not recognise agreements procured by duress.