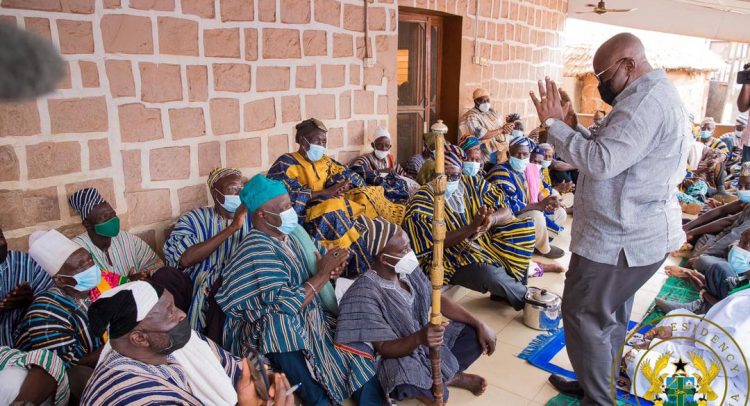 The overlord of the Mamprugu Traditional Area, Nayiri Naa Bohagu Mahama Abdulai, has revealed that victory for the NPP government was the approval of his government’s good work in the first term in office.

“It is my fervent hope and prayer that your government will continue to deliver on your good policies and programs to the good people of this country.”

According to Nayiri, the people of the North East Region have acknowledged the achievement made by the NPP government in the first term of their office which has manifested through the pro-poor policies introduced such as the free Senior High School Education, planting for food and jobs, One-District- One-factory, One-constituency-One Ambulance, expansion of the National school feeding program, the introduction of the Nation Builders Corps (NABCO) among others.

“Mr President, the above-mentioned projects that are being witnessed, has been on the request list of Mamprugu for years which eluded and undoubtedly passed on from government to government. Certainly, we owe you tons of gratitude.”

The Nayiri called on chiefs and the entire citizens of the North East Region to fully embrace the Population and Housing Census exercise to make it successful.

Naa Bohagu Mahama Abdulai appealed to the President to assist in renovating the traditional council office which was built during the colonial era and has since seen no renovation.

“The building is now in a deplorable state and does not befit the status of the Mamprugu kingdom. It is in the light of this that I appeal to you to consider putting up a befitting Traditional council for us.”

He said the region is endowed with lots of natural resources such as commercial quantities of limestone deposits located around Gbangdaa and appealed to the President to consider establishing a cement factory under the One District One Factory initiative.

“This would help mine this natural resource and turn it into a finished product for the use of Ghanaians in addition to the numerous job opportunities that will be created for the teaming unemployed youth in this area and Ghana at large.”

President Akufo-Addo paid a courtesy call on the Nayiri during his tour of the North East region thanked the good people of Mamprugu for their massive votes in the 2020 general elections.

President Akufo-Addo however expressed his disappointment for the loss of two major seats in the North East region which are Bunkpurugu and Nalerigu/Gambaga seats.

“ I have to confess that I am a bit disappointed Bunkpurugu and Nalerigu/Gambaga escaped from our net especially since the two important members of my government were our candidates in those two constituencies.”

He called on stakeholders in the Savannah and North East regions to find lasting solutions to the land dispute between the two.

“It is important to find a lasting solution to this as soon as possible we know that many of the security challenges in Ghana are related to Chieftaincy and land disputes so as quickly as possible the regional coordinating council, regional security council of the two regions with the support of the chiefs find a lasting settlement and permanent demarcation of the boundaries between the people of the North East and Savannah regions.”

Mr President assured that Nayiri that there will be more appointment of sons and daughters of the Mamprugu area to help in the running of his second term in office.