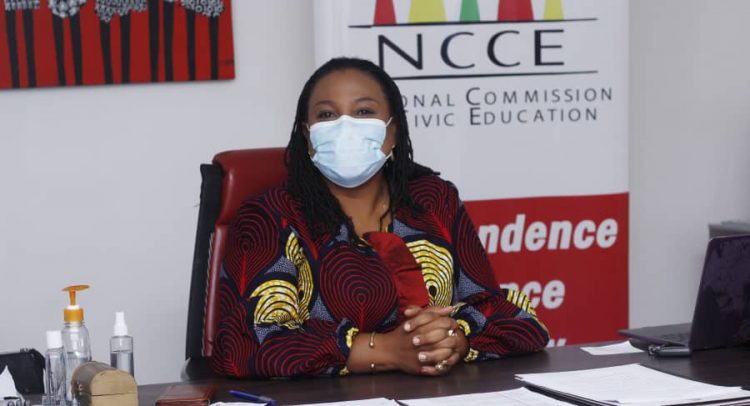 THE DIRECTOR of the National Commission for Civic Education (NCCE), Josephine Nkrumah, has registered her aversion to the activities of some Senior High School (SHS) students who rioted on their various campuses after their first paper of the ongoing West African Secondary School Certificate Examination (WASSCE) on Monday.

The videos in which some SHS students were seen allegedly causing mayhem and making disparaging comments about President Akufo-Addo among others went viral late afternoon on Monday.

The students, according to reports, were agitating when they did not see questions they had prepared for set in the final examinations.

The videos sparked a lot of discussions on both traditional and new media with a chunk of discussants expressing sentiments of disgust against the actions of the students.

Adding her voice to the sea of concerns, the NCCE boss, Madam Josephine Nkrumah, in an interview with DGN online described the incident as “very distasteful and disrespectful”.

She said the situation where students involve themselves in some reckless behaviour and feel it is okay to show their faces while in the act is evidence of a breakdown in Ghana’s socio-cultural values as a nation.

“They have disrespected the highest office of the land. Our own values frown on such acts. We are fast moving away from such values”, she lamented.

“You may have your issues or disappointments but I feel as young people they should be able to express themselves without disrespecting authorities.

“Democracy gives us the opportunity to express ourselves but that doesn’t give us the right to disrespect authority”, she counseled.

She urged parents, guardians, teachers, religious leaders and all stakeholders to “sit up” in the upbringing of the kids.

“As parents, teachers, families and religious leaders, this is a wakeup call for all of us. There’s a lot more we must do for the young generation.

“We need to step up our engagement with the younger generation to make them understand that what they are doing or what they have done is wrong.”

Madam Nkrumah also bemoaned they “they [the students] don’t believe in the value of hard work. The fact that you have past questions doesn’t mean you should restrict yourself to learning only past questions.”

Dealing with the kids
Many a person has called for investigations to be carried out for the perpetrators to face the necessary sanctions.

However, Madam Nkrumah counseled that “they should be identified and cautioned” and made to understand the implications of their actions.

“For me, it’s not a matter of sanctions for the sake of sanctions. But more about sensitizing these young ones on the negativities they’ve generated and their effects on their well being and future.

“We should fish them out and re-engage them.”