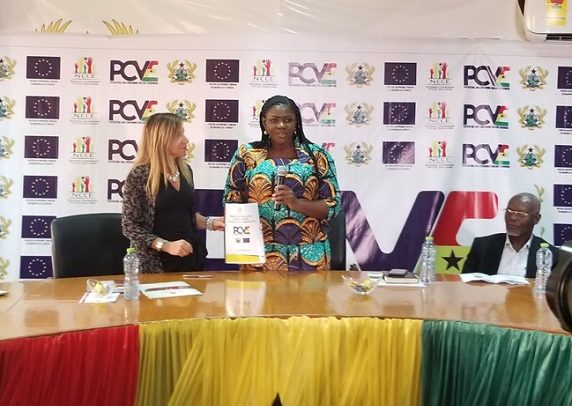 The PCVE project, launched in Accra, aims at intensifying public education, awareness creation, and community support as many other interventions on violent extremism in the five regions in the Northern parts of Ghana; Upper West and East, Savannah, North East, and Northern regions and three other border regions; Oti, Bono and Bono East.

The project will also be implemented in 63 districts and eight regional capitals.

Addressing the stakeholders at the launch, the Chairperson of the NCCE, Ms. Kathleen Addy, said the project is an 18-month-long intervention.

The project will strengthen state actors and non-state actors at the national, regional, and community levels in the fight against violent extremism and terrorism. This will also prevent individuals identified to be at risk of joining violent groups and work with them to adopt more desirable attitudes and behaviour.

“Ghana is facing an existential threat that will decimate the country, and turn people into impoverished refugees.

“Mali, Niger, and Burkina Faso are under the control of terrorist and violent extremists who are looking to expand their territory southwards and connect to the Gulf of Guinea. In their minds, Ghana will also go the way of Burkina Faso.

“The terrorists are aware of what we at NCCE know for a fact and it is a real battle, and we will disarm them. That is why we’re officially launching the Prevention and Containment of Violent Extremism Project; a critical move for the safety and security of our country,” she said.

“We call on traditional rulers and faith-based groups, specifically Imams and Clergy to support our efforts to increase awareness on violent extremism,” she added.

The EU Ambassador to Ghana, Irchad Razaaly, in his remarks, said the European Union has been a staunch supporter and solid partner of the NCCE in the struggle to eradicate violent extremism, and remain fully engaged in ensuring the success of some other EU-funded endeavours in the area of security.

“The threat of violent extremism is not only a nationwide threat but also affects the world, that’s why the EU partners with the commission to embark on the PCVE to eradicate terrorist attacks,” he said.