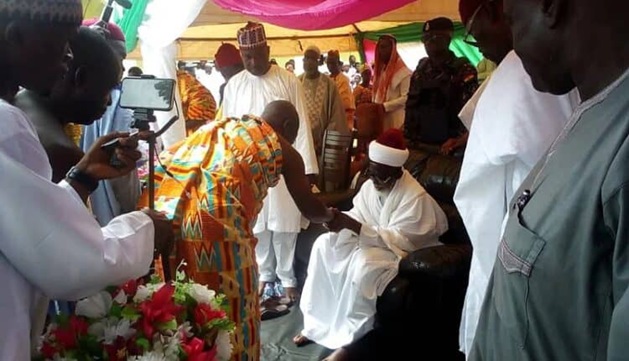 The National Chief Imam exchanging pleasantries with a traditional leader

THE OFFICE of the National Chief Imam is collaborating with the Turkish government to establish an Islamic university at Nzema-East Municipality of the Western Region.

Spokesperson for the National Chief Imam, Sheik Aremeyaw Shaibu, disclosed this during a sod-cutting ceremony at Axim in the Nzema-East Municipality of the Western Region.

It formed part of a two-day visit by the National Chief Imam to the Nzema area where it is believed his mother hailed.

The Chief Imam and his entourage later joined the Muslim Community at Kamgbunli in the Ellembelle District for the Jummah prayers.

Sheikh Aremeyaw Shaibu asked for the support of paramount chiefs and other traditional rulers as well as government officials in the area to help actualise the dream of the National Chief Imam.

He said education was dear to the heart of the Chief Imam, who had contributed towards Islamic and secular education in Ghana.

Sheikh Aremeyaw added that the National Chief Imam, also a member of the National Peace Council, was a great asset to the nation.

The MP for the area, Emmanuel Armah-Kofi Buah, described the Chief Imam as a humble, peaceful, selfless and a just person.

“He is just like Ephraim Amu, George Paa Grant and Osagyefo Dr. Kwame Nkrumah, who are all illustrious sons of Nzema who had contributed to the development of Ghana,” he added.

He promised to liaise with the Chief Imam’s office to ensure that the university project become a reality.

The District Chief Executive (DCE), Kwasi Bonzoh, said Nzemas were proud of one of their own who was an icon of peace and contributed towards the development of the country.