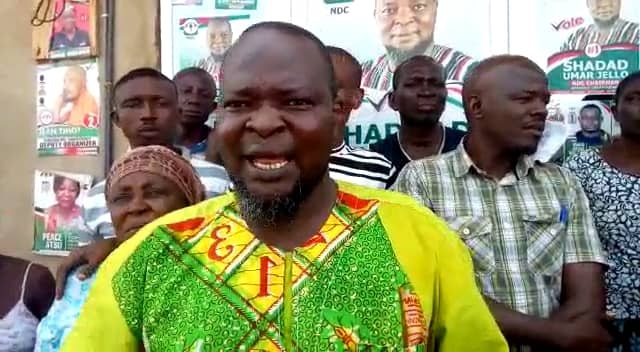 Former Chairman of the opposition National Democratic Congress (NDC) in the Ashaiman Constituency of the Greater Accra Region has been charged for voter registration violence.

Shaddat Umar Jallo was said to have physically assaulted by slapping Electoral Area Co-ordinator of the governing New Patriotic Party (NPP) in Ashaiman.

Information available to DGN Online indicates that a man showed up with a paper note to register at a registration centre located at Nii Doku Electoral Area in Valco Flat, a suburb of Ashaiman.

However, the applicant could not speak any Ghanaian language including Hausa but spoke only French when he was interrogated by officials of the Electoral Commission.

Immediately, the party agent at the centre called the party coordinator, Abdul Rahaman to report the issue to him.

Without any further provocation against the former Chairman, he gave the coordinator a hefty slap from behind which dazed him.

The coordinator therefore reported the matter to the Ashaiman Police and medical report form was issued to him to attend hospital for examination and treatment.

The medical report form fully endorsed by the medical officer, according to Deputy Superintendent of Police (DSP) George Antwi Tano, the Crime Officer of the Ashaiman District Police has confirmed the barbaric act of assault.

He noted that the suspect has been arrested and charged with assault to be arraign before court but has been granted police enquiry bail as a result of unavailability of sitting judge at the court.

The Crime Officer however served notice that the suspect would be put before court immediately a judge is assigned to the court.

It would be recalled that this same former chairman threatened to disrupt Ghana card registration at Ashaiman if the officials refused to accept voters ID for registration.