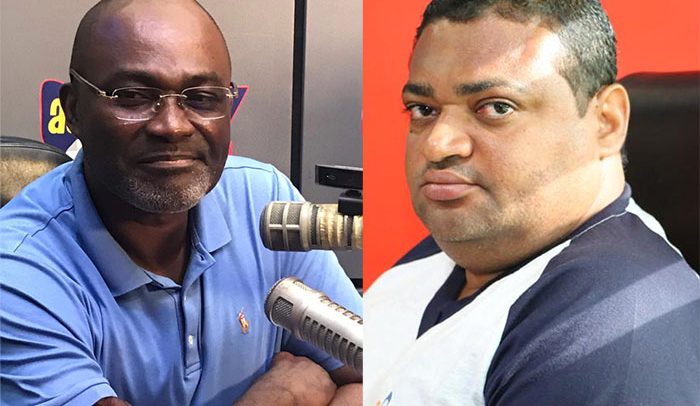 JOSEPH YAMMIN, a top member of the National Democratic Congress (NDC) and Kennedy Ohene Agyapong, a stalwart in the New Patriotic Party (NPP), are set to engage in a legal battle in court soon.

The NDC kingpin insists that Mr. Agyapong, the Member of Parliament (MP) for Assin Central Constituency in the Central Region, has defamed him in public by labelling him (Yammin) as a ‘killer’.

Yammin, a former Deputy Sports Minister, has, therefore, vowed to drag Mr. Agyapong to court, so that he could file charges against him in order to clear his name and also make ‘big’ money out of the case.

Kennedy Agyapong, in a purported audio recording, accused Yammin of plotting to kill some expatriates in Kumasi ahead of the 2020 polls to make the country seem unstable to the international community.

In the audio, which was played on “Nhyira FM” in Kumasi on Monday morning, a voice purported to be that of Mr. Agyapong was also heard accusing Yammin of planning to torch some markets in Kumasi soon.

According to the outspoken politician, Yammin and his cohorts, who have met and discussed how to execute the plot, are doing it to make the NPP government look unpopular, so that the incumbent party will lose the polls.

Mr. Agyapong said, “Their latest meeting was held in Yammin’s house at Kotwi and it was graced by Huudu Yahaya, Faisal Mohammed of ‘Man Ghana’ fame, Yaw Barimma, Charles Amaning and others.”

He alleged that Yammin and his team were targeting expatriates dwelling at places like Asokwa, Ahodwo and Adiebeba to harm them and as a result use the opportunity to appeal to the National Security operatives to take the matter up immediately.

Mr. Agyapong also said one King George, a bodybuilder at Kronum in the Suame Constituency, would soon come out with a plan to form an association of bodybuilders under the ploy of ensuring peace in Kumasi ahead of the polls.

According to him, King George and his team, including Faisal Mohammed, are being sponsored by the NDC, alleging that “they will invite Majority Leader Osei Kyei-Mensah-Bonsu to their meeting and eliminate him in the process.”

Yammin, who appeared extremely angry on “Nhyira FM”, hurled unprintable words at Mr. Agyapong, saying he would drag the lawmaker to court for making “senseless and useless” allegations against him.

According to Yammin, he is aware that 10 National Security operatives from Accra, whom he claimed were working under the orders of Mr. Agyapong, were currently at Offinso because of him (Yammin), saying “I am not afraid of Kennedy.”

Yammin said Mr. Agyapong was a ‘coward’, who usually makes a lot of noise just to make him seem a ‘relevant’ person in the NPP, reminiscing that “Kennedy made similar wild allegations about the NDC before the 2008 elections.”

According to him, he is fed up with Mr. Agyapong’s constant attacks on him, for which reason he will take legal action this time around in order to silence the NPP lawmaker once and for all.

“Maybe, this is God’s way of making me rich. I will sue Kennedy Agyapong and I will use the money that will be awarded to me to buy a Land Cruiser vehicle,” Yammin said, adding that he was innocent of the charges.

According to him, he has not set his eyes on Huudu Yahaya for more than a year now, adding that “Faisal is a known NPP boy and a bodyguard of Asoma Kyeremeh, so it is not possible for him to attend NDC meeting.”

Speaking on the same programme, Faisal, a former Ghana’s Strongest winner, said he had not attended any NDC meeting, saying he is very sure he was not the one Mr. Agyapong referred to in the recorded audio.

“My name is Faisal Alhassan and Mr. Agyapong mentioned Faisal Mohammed in his audio; therefore, it was not me that he was referring to,” he said, adding “I work at the Presidency now as a National Security staff.”

Faisal said he worked with Asoma Kyeremeh, the Minister of Lands and Natural Resources, stressing that he has no links with Yammin; therefore, he could not have been the person Mr. Agyapong was referring to in the audio.

On his part, King George, the bodybuilder that Mr. Agyapong also accused of plotting to eliminate Osei Kyei-Mensah-Bonsu, said there was no iota of truth in the allegations so the public should disregard it.

According to him, the Suame MP has been a constant supporter and sponsor of his gym so he could never plan to kill him, saying “Kyei-Mensah-Bonsu even roofed our gym for us and I am close to him so the allegations are false.”