The National Democratic Congress (NDC) has called on its footsoldiers to be calm over the decision by the appointment committee of parliament to approve Ken Ofori-Atta as Finance Minister.

In a press released dated 29th March 2021, and signed by the General Secretary of the NDC, Johnson Aseidu Nketiah, the party says it will inform its comrades of the decision made by the appointment committee concerning Mr Ofori-Atta’s approval.

It stated that “It is hereby announced to the rank and file of the party and the comrades, that a decision by the appointment committee to recommend Ken Ofori Attah for the approval by consensus will be made public today in Parliament”.

“ Following what transpired previously in respect of vetting and approval of some ministers designate the minority leadership, the party, the party’s leadership as well as the Council of Elders have engaged in extensive consultations with the view to adopt a common position based on the exigencies of the situation”.

“I, therefore, urge all members to remain circumspect when the need for reaction arises. The NDC Parliamentary Caucus and FEC will be fully be briefed accordingly” the statement read. 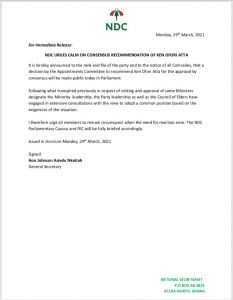