NDC Wants To Kill Me – Allotey Jacobs Cry Out 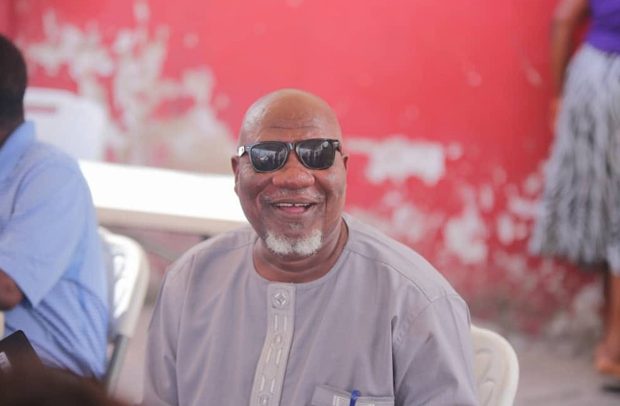 THE sacked Central Regional Chairman of the opposition National Democratic Congress (NDC), now Social commentator, Bernard Allotey Jacobs, has disclosed how some members within the opposition (NDC) are planning his death with.

Mr Allotey Jacobs however refused to mention names, rather disclosed in a Facebook post that those threatening his life are “Ewe boys”.

According to him, his decision to make peace with some individuals he maligned when he was a member of the NDC, is what has triggered some ‘boys’ to threaten his life.

He explained that the said boys have been attacking and hauling insults at him whenever he appears on radio stations to comment on national issues or posts anything on Facebook.

In reaction to the threats, however, Mr Allotey Jacobs who could not fathom why the ‘Ewe boys’ want him dead, indicated he has a God to protect him.

‘’I want Ghanaians to listen to me. I left the NDC party in two weeks the party said they have sacked me. It, therefore, means that am no longer a member of the party. I decided to make amends with people I have maligned they came to insult and threaten my life. I am no longer an NDC member but when I am doing my radio commentary they will come and insult me. When I post anything on Facebook page na wahala’’.
He added that ‘’Especially Ewe boys will come threatening me with death threatening me with ewe gods. Well God is my Protector’’. 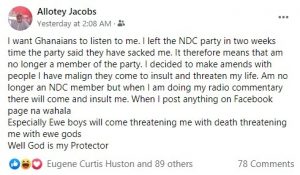