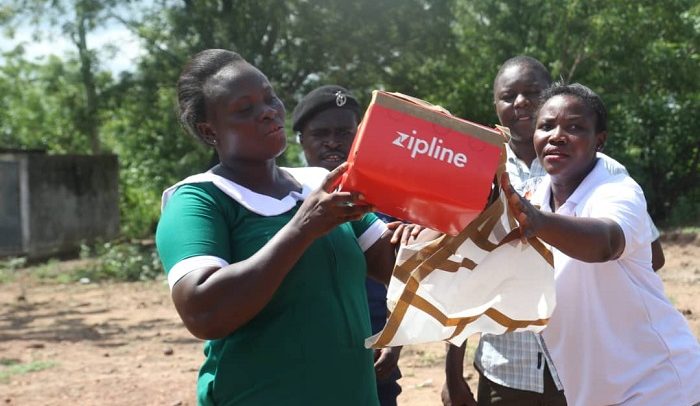 Afram Plains is one of the highly inaccessible areas in the Eastern region due to its poor road networks.

There were wild jubilations from indigenes including chiefs, health workers as the drone flew over the Volta Lake and mountainous terrain to make its first delivery at Ekye, a community within the Kwahu Afram Plains South District.

Health workers, police officers, residents and local authorities converged at the field of the Ekye Health Centre to witness the delivery of the medical supply.

The eagerness to see the drone for the first time was clearly visible in their faces.

Ekye is on the list of the several deprived and hard-to-reach communities in the Afram Plains.

Emergency cases in the area are usually referred to the Donkorkrom Presbyterian Hospital which is about two hours away.

With the drone service now extended to the area, there are high hopes that referrals to bigger health facilities due to unavailability of essential medicines, would be significantly reduced.

This is the first time a medical drone has delivered drugs across a water body.

The order was placed around 1:05pm by some nurses of the Ghana Health Service who underwent training on placing orders for medications to Zipline.

And within a period of about 45 minutes the supply was delivered from the Zipline Centre at Omenako.

The Kwahu Afram Plains South District Director of Health for the Ghana Health Service (GHS), Joana Amankwah, was highly elated about the delivery.

She described the inclusion of Ekye into the operations of the Zipline Medical Drone service as a great relief.

According to her, “in effect, we are very much excited.”

She explained that the inclusion of Ekye in the service was a game changer as far as responding to emergency cases was concerned.

The Health Director bemoaned how challenging it has been over the years in handling emergency cases.

She revealed that transportation has been a major problem for the area in dealing with emergency cases.

She stated that patients were usually referred from Ekye to the Donkorkfrom Presbyterian Hospital.

She expressed the hope that other Afram Plains areas would also benefit from the service in due course.

The Systems Integration Lead at Zipline Ghana, Naa Adorkor Yawson, said Zipline was committed to serve all communities in the area.

According to her, “we (Zipline) are hoping that daily we will get a lot of flights coming here because it is one of the hard-to-reach areas.”

Already, the drones have been delivering medications and blood to quite a number of communities including Asamankese, Suhum, Awenare, Mangoase, among others.

According to Madam Adorkor Yawson, Zipline was working tirelessly to plot more flight routes as part of its commitment to deliver drugs to hard-to-reach areas.