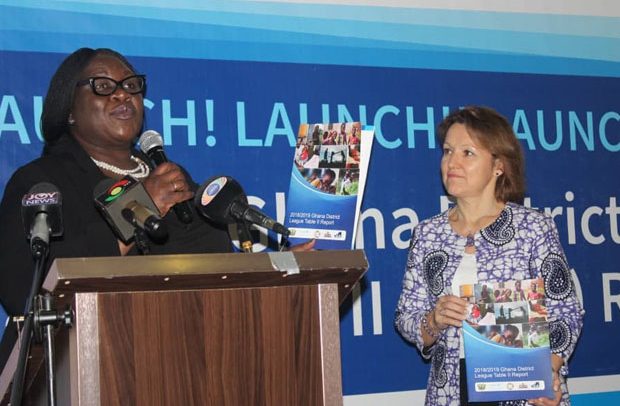 Results from the 2018/2019 District League Table (DLT) II shown wide disparities within districts of the various regions in relation to social development and service delivery outcomes.

Again, the results ranked the Greater Accra Region as the best in the regional ranking, whereas Eastern Region was the worst, well below the positions of traditionally “poor” Regions like Upper East and Upper West.

Since the introduction of the first DLT in 2014, it has been used as a social accountability tool that ranks all of Ghana’s Districts by their level of social development and service delivery, providing evidence for enhanced decision-making.

Based on consultations with the key Ministries and Agencies concerned, the DLT II used indicators from seven key sectors including health, education, sanitation, water, child protection, governance and security, to compile a single score for each District.

Using the Basic Education Certificate Examination (BECE) results, Western Region topped the education sector with an impressive 88 percent while the Upper West recorded the poorest performance with 48 per cent.

Central Region topped the chart with the highest number of birth registration recording 90 per cent coverage as compared to the Eastern Region which recorded just 58 per cent.

The Greater Accra Region topped the chart in water coverage under the sanitation sector with 77 per cent as Eastern Region had the lowest water coverage of 54 per cent.

Anne-Claire Dufay, UNICEF Representative in Ghana, speaking at the launch, said as Ghana sought to achieve the sustainable Development Goals, (SDGs) it was useful to note the disparities between Districts and regions in social sectors as it can enable better prioritization, planning, resource allocation and implementation.

“Ultimately, the objective of the report is to provide evidence to inform equity-focused decisions, so that all children and their families have access to quality basic social services,” she indicated.

“Let’s make sure we leave no one behind.”

Dr. Yoshimi Nishino, Chief of Policy and Evidence Studies, UNICEF, said a new way of calculating the total scores for the Districts and for the overall index was used to enhance the analysis of the data.

She thus cautioned the public to be careful in comparing this year’s results with previous years’.

“While the overall ranking or position of each District matters, it is even more important to emphasize the Districts’ performances in the specific sectors”.

“What is new about this District League Table II (2018/2019) is that two indicators were added to track progress related to the birth registration rate and net attendance rate at primary level,” she said.

Dr. Nishino added that the rural and urban water coverage rates were combined into one water indicator as well.

Each year, the results of the Ghana’s District League Table trigger constructive national debate and call for action towards improving social services for people in Ghana.

Prof. H Kwasi Prempeh, Executive Director of CDD-Ghana called for a national dialogue based on the results of the DLT.

“It is critical that insights from this DLT II Report are shared by the media and all stakeholders at national, regional and district levels toward generating more dialogue and responses to achieve sustainable and inclusive development in Ghana,” he said.