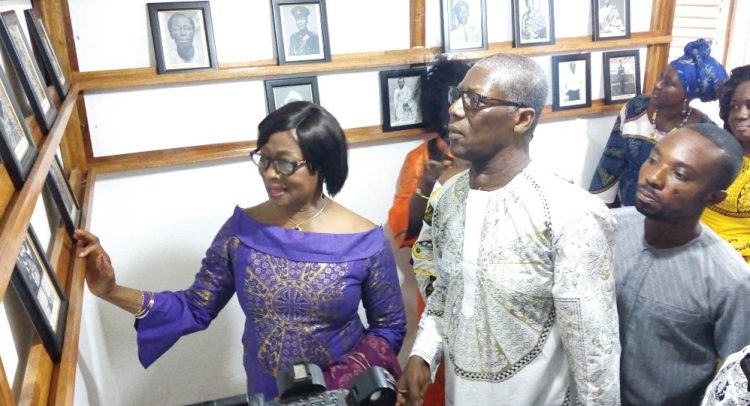 The first-ever Ancestral Heritage Museum of the late Nana Kwasi Akuffo, the late Paramount chief of Akuapem has been revealed.

The new museum and a tourist center houses the traditional antiquity of the first paramount chief of Akuapem, who ruled from 1895 to 1907, and 1919 to 1927.

The Ancestral Heritage Museum, christened: “Akuffo Descendants Tourism Project” contains the mysterious fertility bed on which the chief slept with 62 recognized wives and produce within 44 years, 147 children between 1883 and 1927.

The late Nana Kwasi Akuffo was enstooled as the 15th occupant of the Ofori Stool of Akuapem on December 3rd, 1895 at the age of 32.

His reign was truncated on July 29,1907, when he was destooled and banished from the kingdom after a long political dispute.

The home of Akuffo Descendants was built in 1891 and renovated in 2016.

Chief Justice, Her Ladyship Sophia Akuffo and the Akuapem North Municipal Assembly of the Eastern Region commissioned the tourist site.

The Chief Justice who is a descendant, unveiling the plague of the house which was on the theme “Our Heritage, Our Pride,” said the house would serve as a pivotal point for the revival of tradition, culture, and norms.

Mr. Olivia Opoku Adoma, the Director of Policy Planning and Monitoring Evaluation’s under the Ministry of Art and Culture who represent the Sector Minister in her speech said tourism and culture is one of the fastest growing sectors of the economy, adding that the imitative will help in job creation for residents.

The Member of Parliament for Akuapem North, also the Deputy Minister of Information, Nana Ama Dokua addressing the gathering said the benefits that residents will gain from the site, saying that the tourist site will in one way or the other help create employment for residents.

The Akuapem North Municipal Chief Executive, Denis Aboagye also expressed his affections with the introduction of the tourist site in his area as he believes the initiative will boost invome generation in community.

The Deputy Eastern Regional Minister, Samuel Nuertey Ayertey on his behalf expressed his heartfelt appreciations to descendants of Akuffo for the initiative.

He commended the Akuffo descendants for living such a remarkable history for the people of Akropong by creating a facility for the indigenous and visitors to learn the Akuapem culture.

Nana Appiah Nti IV, the chief of Akuapem Tutu also expressed how elated he was with the initiative but was of the view that proper attention had not been given to culture.

He has therefore called on Ghanaians particularly the tourism industry to pay attention to tourism and culture as he believes it will fetch the country with a lot of income.