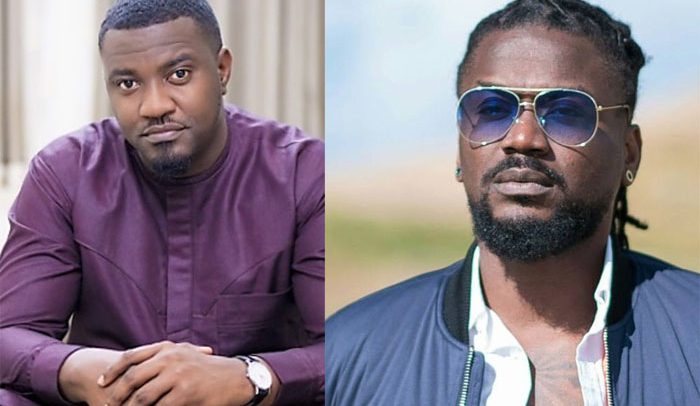 Actor John Dumelo and dancehall great, Samini are battling it out on Twitter, following a tweet by the actor on plans to build a new Parliamentary chamber.

The actor, in a tweet, pleaded with Parliament to halt their preparations to build the new chamber explaining the $200m could be used to build 10 factories to employ 10,000 Ghanaians.

Samini, who agreed with the tweet, pointed out, however, that a Landcruiser V8 vehicle retrieved from John Dumelo, allegedly given to him by the former NDC government could equally have solved problems in his village if the money used to purchase the vehicle was applied properly.

John Dumelo made the headlines in late March 2017, when he was accused of driving without approval, a government vehicle, a Toyota Land Cruiser with registration GE 8118 –16. The vehicle he used throughout the 2016 elections when he campaigned for then-President John Mahama, was found at a workshop in 2017 with men trying to respray it.

Resurrecting the issue in a reply to the actor’s tweet on the new chamber for Parliament, Samini tasked John Dumelo to reveal the details behind the V8 controversy, “did you try to keep it or they lied on you chale. Ghana wants to know.”

The actor who refused to give the details to the controversy posted a photo of his new V8 taking a jab at Samini and his record label Highgrade Family.

He also accused the singer of using social media to stay relevant. The actor, who has made his political ambitions clear, wondered why Samini found it useful question him on how he got his V8 but completely ignored his philanthropic and farming activities.

Unfazed by the comments, Samini pressed for more answers on the saga, explaining his comments are not for jokes or a publicity stunt.

He wrote, “you see the guy en answer? ebe today I see say @johndumelo1 no Dey guard. Told you this is not comedy. The only reason I called you out was because we never got to the bottom of your v8 case as a nation. Not because I support the foolish chamber idea bro.dont try Rasta.”

Read more tweets from the engagement.

B5 Plus Adjudged Ghana's Superbrand