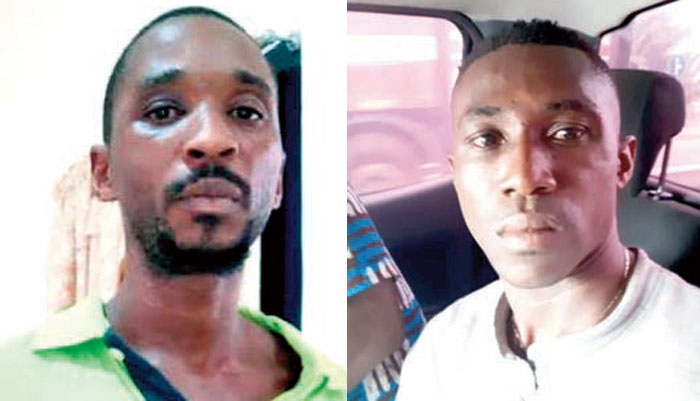 Samuel Udoetuk Wills, 28, and John Oji, 29—the two Nigerian suspects in the Takoradi kidnapping and subsequent killing of the Takoradi girls—have now been charged with murder.

The two Nigerians were before a Sekondi High Court on the charges of conspiracy and kidnapping, and they were yesterday sent to the Takoradi Magistrate Court by prosecutors who preferred murder charges against them.

The Attorney-General’s Department led by State Attorney Adelaide Kobiri-Woode entered a nolle prosequi at the Sekondi High Court to discontinue the case and then quickly sent the case of murder to the Magistrate Court.

The State Attorney explained that they had finally received the documents they were expecting from the police which called for a new charge to be preferred against the two after a thorough investigation.

“We have now received the document we were waiting for from the police. The nature of the document makes it necessary to change the charges,” she said, adding “on February 4, 2020, the state entered a nolle prosequi and so if the court has received it we ask the court to grant it so that preliminary committal processes will begin at a lower court.”

It was the police who brought only John Oji to the court yesterday and the prosecutor, Chief Inspector Bernard Ahinsan, explained that the key suspect, Samuel Udoetuk Wills, could not be in court because he was still serving his 18-month jail term for escaping from police cells and destroying public property.

Chief Inspector Ahinsan then pleaded with the court to remand John Oji for the police to continue to unravel the case and also to enable them to commence committal processes in two weeks.

The court, presided over by Michael Ampadu, remanded John Oji in prison custody to re-appear on February 13, 2020.

In September 2019, the Ghana Police Service announced that the four missing girls in Takoradi were dead.

The announcement was made by then acting and now Inspector-General of Police, James Oppong-Boanuh, at a press conference after a DNA test on the skeletal remains of the girls retrieved from some parts of the Sekondi-Takoradi metropolis was concluded.

The victims—Ruth Quayson, Priscilla Blessing Bentum, Priscilla Koranchie and Ruth Abekah—were believed to have been kidnapped between August 2018 and January 2019.

Round 2 Of Polio Vaccination Starts In Middle Regions