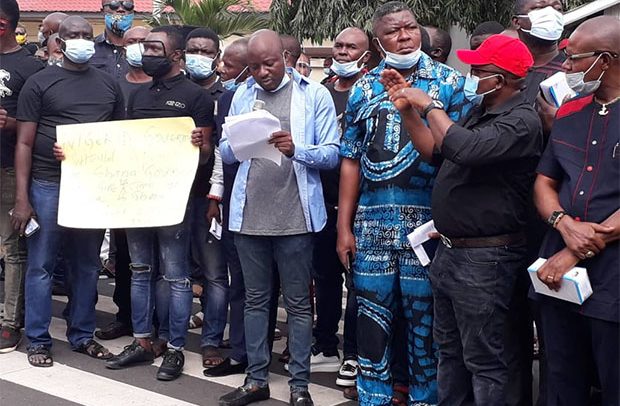 Barely two days after Ghana as a host country had commissioned the secretariat of the African Continental Free Trade Area (AfCFTA) to facilitate trade, some Nigerians living in the country have raised concerns over the country’s commitment to promote free trade on the continent.

Members of the All Nigerian Community (ANC) Ghana on Wednesday picketed the entrance of the Nigerian High Commission in Accra to register their displeasure to their home government over the hostility towards Nigerian traders which has led to the close down of some shops in Ghana.

Over hundred men clad in black attire, with some bearing placards that had inscriptions such as “Buhari Save Us From This Humiliation”, “ECOWAS Parliament, What Is Happening To ECOWAS Integration (Save Us)” and “We Don’t Have A Million Dollars”, gathered to present a petition to authorities at the High Commission.

General Secretary of the ANC-Ghana, Isaac Osahon Ekhator, in a press statement called on President Muhammadu Buhari to expedite actions towards a lasting solution that would inadvertently ease the plight of Nigerians in Ghana amid economic downturn caused by the Covid-19 pandemic.

The ANC-Ghana also called on the Nigerian government to give reasons for its inactions which they described as “indefensible and unacceptable” towards the wellbeing of its citizens in the diaspora which had led to constant harassments and humiliation.

“It is no longer news that the Nigerian trading community in Ghana is seriously under pressure as a result of the intensity of clamp down and closure of Nigerian owned business,” he said.

Mr. Ekhator indicated that such exercise carried out by the activation of a purported local investment regulation which prohibits foreign nationals from conducting retail businesses in the Ghanaian market space except on condition of providing an outrageous capital of a million dollars which was beyond the reach of most Nigerians in Ghana.

He has therefore called on Ghana as a country which prides itself as a beckon of tolerance and hospitality to put a human face to exercising its local laws which he perceived to be punitive and discriminatory as it undermined the core tenets of regional integration.

Contrary to the conviction of Ghanaian authorities, the decision of most Nigerian citizens to move to Ghana, he said, was based on a conviction that they were protected by ECOWAS laws to move and make a living.

“Nigerian government seems to have bought into a lie that Nigerians are ECOWAS citizens with regards to privileges to reside and conduct businesses within the sub-region. It is time for a rethink,” he said.

President of Nigeria Union of Traders Association in Ghana (NUTAG), Emeka Chuku Nnaji, on his part called on heads of ECOWAS to speak on the issue to bring finality to the matter as there was no need for signing of trade agreements if governments could not protect their citizens in foreign countries.