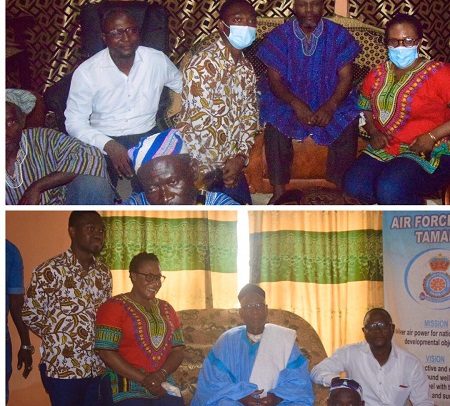 According to her, the scholarship is part of the institution’s 20th anniversary corporate social responsibility to empower females in IT in the region.

This was made know when representatives from NIIT Accra paid a courtesy call on Gulkpe Naa and the Dakpema Naa at their various palaces in Tamale.

The chiefs were requested to select four females to benefit from the scholarship.

Madam Abbiw said as part of their 20th anniversary NIIT rolled out a program called Job Factory which was intended to benefit the youth across the country but due to Covid-19 pandemic the program was delayed.

“ The program comes with a certificate at the end of the program and it’s accessible online .”

She encouraged the beneficiaries in Tamale to take advantage of the program adding that it will enable them get skills in graphic design, social media marketing , web development among others which will give them to work as freelancers.

“In the next few years , the top three most demanding jobs will be in technology and so I want to challenge the females to venture into technology and shouldn’t allow anything to stop them.”

Dakpema Naa, thanked NIIT management for supporting women empowerment and appealed to NIIT to increase the number for females in the region to benefit from the program.

The Gulkpe Naa , Abdulai Alhassan , said the initiative of NIIT will enhance and promote girl child education in the region.

He pledged his support towards the initiatives of NIIT for the betterment of Tamale and Ghana as a whole.

Over 2,200 Ghanaian Workers Rescued In Lebanon