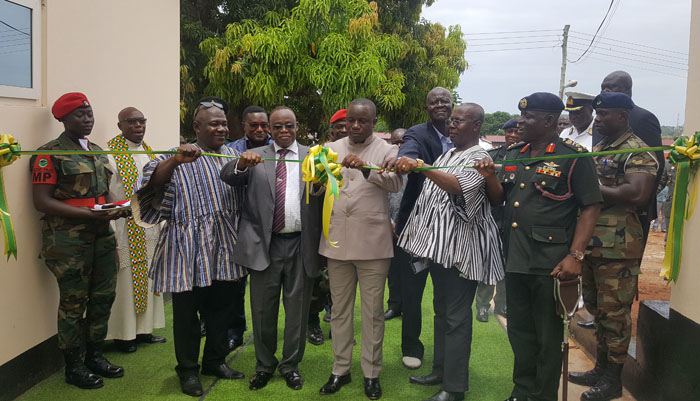 Dominic Nitiwul, Lt. Gen. Akwa and others commissioning the facility

The construction of the four-block transit facility and dog breeding kernel was made possible through a public private partnership and the Armed Forces.

The accommodation at the academy is for the use of trainers while the kernel is intended to facilitate the dog breeding programme of the Military Police Dog Training Academy.

The minister, who is also Member of Parliament for Bimbilla, said plans were in an advance stage to upgrade the training facility from its current status of a company to a fully-fledged training school with its own command structure.

“The Ghana Armed Forces is aware of the current threats and the need for such collaboration. It is also developing a canine programme to be shared by all security agencies both within our country and in the sub region,” he disclosed.

The engagement of such dogs within and along our borders should deny terrorist groups the space to operate.

“These dogs can only be employed after they have been well trained,” he said, adding that “dogs are intelligent and can help with detection of any ordinance device and illicit substances in real times”.

The Minister of Defence commended trainees of the academy for their performance and zeal during the training and deployment of dogs at the Kotoka International Airport and Tema Port to strengthen the security.

The Provost Marshall (head of the Military Police), Col Errington Commey, said that his Unit had built the capacity to support all security operations in the country through the training of dogs and its personnel for tactical purposes at various security installations across the country.

He said the boarding facility has 20 rooms for 40 trainees at a time, with a central basketball court, each room fitted with a kitchenette, toilet and bath and all the necessary furnishing.

The Officer Commanding (OC) the Dog Unit – Captain Ebenezer Akwerh, had his Belgian Shepherd (Malinois), German Shepherd, Rottweiler, Labrador and Basenji breed of dogs, perform security drills to the admiration of all.