No Challenger For Bawumia Says Akufo-Addo 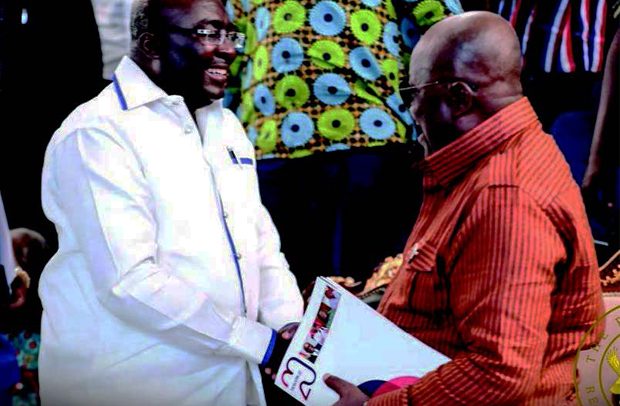 President Akufo-Addo and Vice-President Dr. Mahamudu Bawumia during the TESCON event in Ho on Wednesday

THE PRESIDENT, Nana Addo Dankwa Akufo-Addo, has praised the exceptional economic prowess and intelligence of his vice, Dr. Mahamudu Bawumia.

Dr. Bawumia, speaking during a town hall meeting in Kumasi recently, outlined the successes of the New Patriotic Party (NPP) government so far.

He particularly used figures to explain basic issues to buttress his point that the economy was being managed better by the Akufo-Addo administration.

The Vice-President, whilst concluding his delivery, challenged anybody in the country that wanted to dispute his statement to do so with factual evidence.

Delivering the State of the Nation Address (SONA) on Thursday, President Akufo-Addo, commenting on Dr. Bawumia’s statement, said so far nobody had come out boldly to challenge Dr. Bawumia’s figures.

Obviously making mockery of critics of Dr. Bawumia, who are mostly National Democratic Congress (NDC) members, he said his Veep is very knowledgeable.

President Akufo-Addo indicated that whatever Dr. Bawumia said about the state of the economy in Kumasi was nothing but the gospel truth.

He said it is true that Ghana is now one of the fastest growing economies in the world, with a reduction in inflation and other positive developments.

According to him, even though Ghana is in an election year, investors are still trooping into the country to do business and “that alone shows that we are on the right track”.

President Akufo-Addo stated that indeed Ghana was working again under the NPP government, saying “Ghana is in good health now”.

According to him, through the Zongo Development Fund —

a policy initiated by his government — developmental projects are springing up fast in the Zongo areas.

He stated that his administration had lived up to expectation, stressing that the NPP required four more years in political office to do more for the country.

The President concluded his address by declaring boldly that “our nation is in good health, and in good, competent hands!” and it came with spontaneous applause from the audience.

“We have done much more than we inherited; we are creating conditions for young people to have hope again, and we are determined to do more. Things are working in Ghana, and Ghana is surely changing,” he added.