No Intimidation In Ketu South As Residents Massively Register 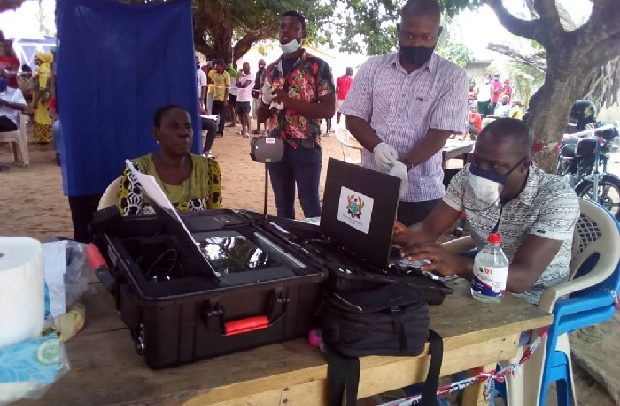 Contrary to claims that residents in the Volta region, particularly Ketu South are being intimidated and threatened against partaking in the voters’ registering exercise which began today, turnout across the region have been massive.

In fact, there was no sign and reports of intimidation as at the time of filing this report as all registration centres opened for the day and first phase of the exercise.

For most of the places toured by DGN Online, the exercise commenced on time with residents queuing even before 7:00 am.

One of the registration centres, Akusa Park as at 10:00 am had a huge number of residents storming the centre to register.

Registration officers were finding it difficult to control the crowd as failed to adhere to social distancing due to attempts to secure positions in the queue.

Despite the numbers, almost all persons seen had their nose masks on with just a few without it.

Fifty persons had registered as at the time of filing this report.

The situation was the same at the Asalafia Basic School.

Turnout was high with long queues.

As at 11:00am the centre had registered about 55 persons.

In Ho, the Volta regional capital, turnout was also very impressive contrary to the initial thought of apathy and boycott of the exercise by residents most of whom are sympathetic to the opposition NDC who was against the new register.

As at the time of filing this story no part of the region have recorded any incident of damaged machines, intimidation of residents or shortage of registration materials.

The Volta region, particularly Ketu South has become a centre of attraction since the issue of registration exercise came up.

The opposition NDC had insisted and accused the Electoral Commission, the National Identification Authority and the government of colluding to disenfranchise the Volta region through various machinations.

However, the situation on the day of the registration exercise is calm and peaceful without any evidence of the earlier fear and panic allegations made. Eli Michaels, a resident of Aflao said, it appears the tension and confusion is all much ado about nothing.

I Didn't Say Voltarians Are Not Ghanaians - K.T. Hammond